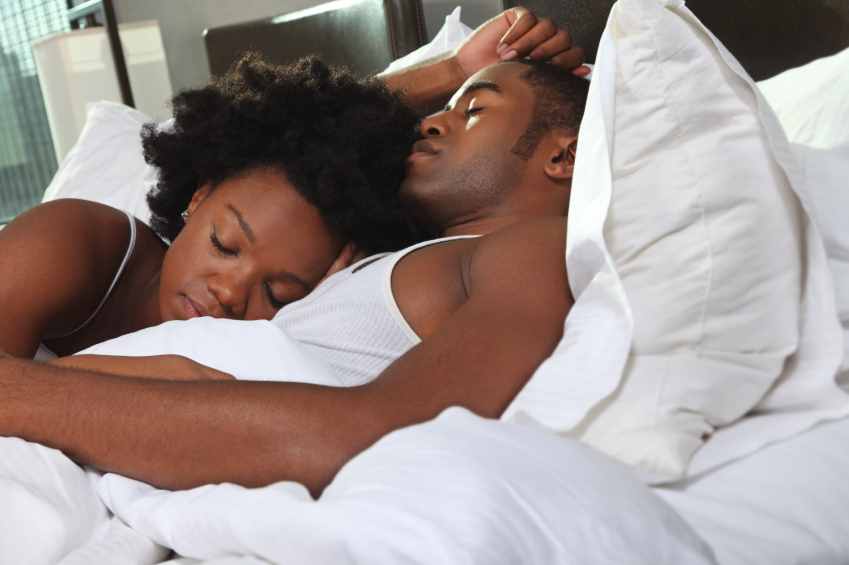 Mistake No. 1: Not Having Enough Sex
Naturally you won’t want to think you’re doing anything wrong in regards to baby-making, but undoubtedly this mistake is exciting to fix! You may be thinking that reducing sex to “save” your guy’s sperm — or only getting busy when you are ovulating — will make becoming pregnant much easier. However, many days of not having sex can mess up conception. “It’s easy to miss the fertile period if sex is limited only to when you think you’re ovulating because many women believe they’re ovulating when they actually aren’t,” says an expert. So just do it — have sex as frequently as you like, paying special attention to the few days before ovulation.

Mistake No. 2: Having Excessive Sex
A lot of couples think they’ve got conception all figured out: The more sex you have, the easier and quicker you’ll conceive. But more is not always better. Although having sexual intercourse regularly won’t reduce the potency of a man’s sperm, as many believe, it too often can potentially create problems, says an expert “If it’s for reproductive purposes alone, having sex multiple times a day or even every single day could cause ‘burnout,’ and the couple may begin to view sex as little more than a pre-ovulatory chore,” he explains. Then, when that window of fertility is open, one or both of the partners may not be interested, resulting in a missed opportunity.

Mistake No. 3: Sticking with the Same Position
Maybe you have heard that missionary is the best position to conceive, or that you need to keep your hips elevated after sex. Wrong. Whether you’re on top, your guy is on top, or you’re doing a crazy new position you learned about, the outcome is the same. “When a man ejaculates, sperm swims out, goes directly into the cervical mucus and into the fallopian tubes,” says an expert “This happens in a matter of seconds, regardless of the position during intercourse,” So, instead of sticking with one particular thing, mix it up and have fun!

Mistake No. 4: Assuming the Woman is the Problem
When a couple has a difficult time getting pregnant, many people (couples included) automatically think it means something is physically wrong with the woman. Men are less likely to believe or to want to believe something is wrong with them, because fluids will come out, whether there’s sperm there or not, they assume it means they’re fertile, but that’s not necessarily the case.

Mistake No. 5: Mistiming Ovulation
Knowing exactly when you ovulate can be tricky. Many women follow the textbook rule, believing they ovulate 14 days after the first day of their period, but cycle lengths vary, and ovulation doesn’t always occur at the same time each month.

Many women also think they can pinpoint ovulation because of symptoms. If you’re in tune with your body, you may notice that you have an increased clear egg-white-like vaginal discharge a few days before ovulation, but many women miss this, and some mistakenly think their normal discharge is a sign of ovulation. Instead of guessing (possibly wrong), using an ovulation predictor kit can give a more accurate answer.

Mistake No. 6: Having Sex the Day of Ovulation
If you have an ovulation predictor kit, or if you’re charting your basal body temperature or using the calendar method to try to identify ovulation, you may think it makes sense to get physical the day of ovulation — but that may be too late. After ovulation, the egg can be fertilized for only about 24 hours. If you’re wrong about ovulation, you’ll have to wait to try again the next month. Because sperm can live for three to five days, having sex in the few days leading up to ovulation will increase your chances of getting pregnant, experts say

Mistake No. 7: Using Lubricant
Think carefully the next time you reach for the lube. Commercial lubricants negatively affect sperm motility, making it harder for the sperm to reach the egg. If you must use a lube, try a sperm-friendly lubricant. Or if you prefer a more natural lube, olive oil, vegetable oil, baby oil, and even egg whites are safe
.

Mistake No. 8: Rushing to a Specialist
After two or three months of trying, it’s easy to get discouraged. That doesn’t mean an immediate appointment with a fertility specialist is in order. Even under ideal conditions, perfectly fertile couples can take several months to become pregnant. If you’re under 35, with regular menstrual cycles and no underlying health issues that might affect fertility, experts advises waiting it out for one year.

Mistake No. 9: Not Getting Help Soon Enough
In some instances, seeing a fertility doc as soon as possible is the best move. If you’re 35 or older, you should see a fertility specialist after six months of trying without success. And if you’re younger and have irregular periods or a history of sexually transmitted infections (STIs), ectopic pregnancy, pelvic inflammatory disease (PID), or other health issues that may affect fertility or pregnancy, it’s advisable seek out a specialist immediately.

Mistake No. 10: Neglecting Your General Health
Often, when couples are trying to conceive, they focus so intensely on their reproductive health, they neglect their overall health. It becomes all about cervical mucus, sperm count, and doing the do. But it’s vital that you pay attention to your health in general because issues like weight, smoking, stress, and medications can affect fertility too. Before trying to conceive, it’s a good idea for both you and your guy to have a medical checkup to discuss any issues that may affect fertility or pregnancy.