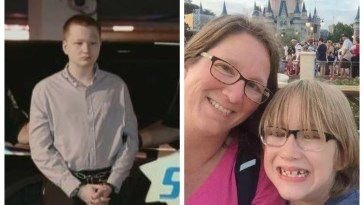 A 14-year-old boy identified as Jacob Remalay murdered his mum and younger brother after he was given a vacuum cleaner for Christmas.

According to reports, Jacob Remalay, who is now 16, allegedly gunned down his mum Dana, and brother Caleb, because his parents show favoritism to his brother, who they bought a trip to Disney World while he had to stay at home and do chores.

Forensic psychologist, Dr Nicole Applegate, gave details of Remalay’s parents’ alleged favoritism at a hearing at Westmoreland County Court in Pittsburgh Thursday to decide whether his trial should be moved from an adult to a juvenile court.

Speaking for the defense, she told of how Remalay suffered multiple personality disorder, and allegedly committed the murders while under the influence of another personality called ‘Wrath.’

She said his other three personalities were a witch, an old man and little girl.

Remaley’s father David also gave testimony to the court, saying that he had ‘poor judgement’ with his parenting and telling of his anguish at losing his family.

His son is accused of shooting his mother Dana, 46, and eight year-old brother Caleb dead with a gun at their home in New Stanton, Penn., in November 2016, while his father was at work.

He backs calls for Jacob to be tried in a juvenile court.

Prosecutors and defense attorneys will now submit written arguments to a judge, who will rule on where Remalay will be tried.