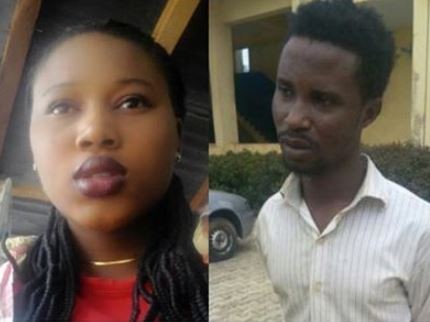 The 24-year-old man, Salu Ladayo, who allegedly stabbed a 19-year-old secondary school leaver,  Confidence Nwama,  to death in Oshinle area of Akure last week for refusing his love advances has blamed the devil for the incident.

Upon interrogation with the police, he said,

“After she came back from the venue of her West African School Certificate, WASC, examination, she was told her that I was seen with another girl.

She was very annoyed and came to my place on Saturday. She started cursing me, saying if I make love with another girl, that I won’t make it in life. I asked her why she should be placing a curse on me. I told her I could not do that and I returned the curse to her. She left in annoyance. She came back on May 15,2018 and I asked her to forgive me and as we were talking, I begged her to revoke the curse but she refused.

I then seized her phone and we started to drag the phone. She went out and told one of our neighbours what happened. When the woman came in, I told the woman what she did and the woman left to call another of our neighbour and before she (neighbour) came back, I didn’t know what came over me, I took a knife and stabbed her to death.”