3 members of same family charged with murder of a security guard who tried to enforce mask policy. 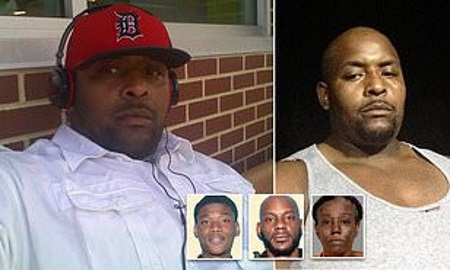 Calvin Munerlyn, 43, a dad of six was shot dead on Friday around 1.40pm while working at a Family Dollar store situated at 877 Fifth Avenue in Flint, Michigan.

Sharmel Teague, her husband Larry Teague, 44, and her son Ramonyea Bishop, 23, have already been arrested for first-degree premeditated murder and gun charges for killing the security guard, after he refused to let her daughter enter the shop without a face mask amid the Coronavirus pandemic.

Munerlyn reportedly told Sharmel she had to leave the store because her daughter didn’t have a mask on, this led to an argument between Teague and the security guard.

A few moments later two men later entered the store. Larry Teague yelled at Munerlyn about disrespecting his wife and Bishop shot Munerlyn at the back of the head, according to Genesee County Prosecutor David Leyton.

Sharmel Teague has been arrested but Teague and Bishop is still at large.

‘From all indications, Mr. Munerlyn was simply doing his job in upholding the Governor’s Executive Order related to the COVID-19 pandemic for the safety of store employees and customers,’ Leyton said in a statement Monday.

‘It is important that the governor’s order be respected and adhered to, and for someone to lose their life over it is beyond comprehension,’ he added.

The premeditated murder charge in Michigan carries a mandatory sentence of life in prison with no chance of parole if they are convicted.

After suffering gunshots wound to the head, Munerlyn was taken to Hurley Medical Center, where he later succumbed to his wounds.

He is survived by his wife of 10 years and their six children.

Munerlyn’s mother, Bernadett, said she wants justice for her son.

‘They didn’t have to take my baby and it wasn’t that serious,’ she said. ‘All you people just have to do is listen to the law, listen to the governor.

Just stay home. If you don’t have to come out, then you wouldn’t need a mask unless you’re out getting groceries or necessities. All my baby was doing was his job working and doing his job.’

‘It is incredibly sad that in this crisis that this life was lost. We are mindful of how important it is that people keep a level head, that we do the right things protecting ourselves and protecting others,’ Gov. Whitmer told reporters Monday.

“This is senseless. Over a mask. Over a mask?” Munerlyn’s cousin, Tina James, told WJRT.
“This is not the way to do things right now. We need to come together.