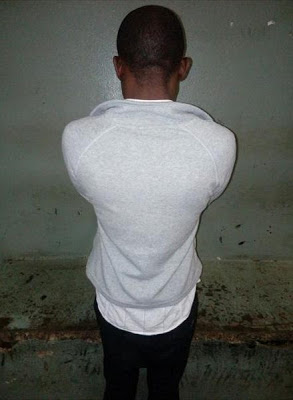 A 37-year-old foreign national is facing abduction and rape charges for allegedly turning a 12year old girl into his sex slave in Pretoria, South Africa.

According to Sunnyside Police spokesperson, Captain Daniel Mavimbela, the Grade 7 learner was reported missing from her home in Mamelodi in early September.

“According to reports, the girl left home to meet with friends at a recreational park just outside Silverton,” said Mavimbela. “Instead she came across an unknown girl, who subsequently led her to a flat in Sunnyside, east of Pretoria, where both of them were to spend the night together.”
Police were told that when the girl woke up the following morning, she saw the man seated on the bed and the unknown girl was nowhere to be found.

“From that point on the 37-year-old man allegedly kept the young girl as his sex slave and raped her repeatedly. It is believed that during the same period, the man attempted to groom the victim into prostitution.”

The girl was apparently beaten for failing to attract motorists to engage in sexual relations with her. She was rescued after being spotted by passersby on Thursday when she tried to escape from the flat.
“Though the man was not present at that time, he is said to have appeared on the scene. He unwillingly agreed to release the girl shortly thereafter,” said Mavimbela.

“The man was arrested yesterday shortly after the matter was reported to the local police.”
The police’s family violence, child protection and sexual offence unit is investigating. The man will appear in the Pretoria Magistrate’s Court on Monday, December 5th.