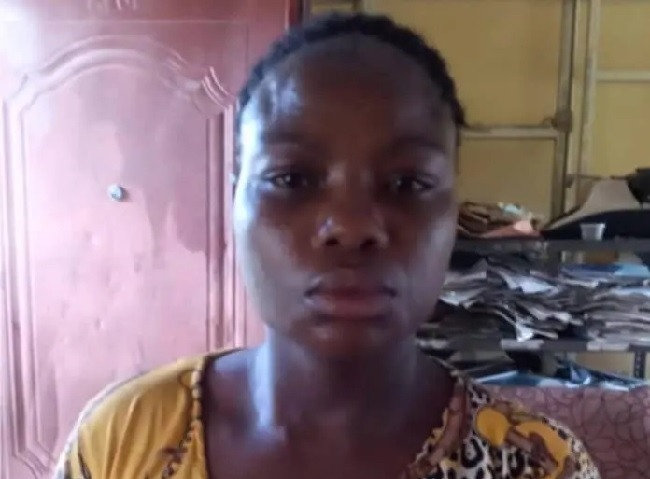 A 39-year-old food seller, Seun Sola, has been arrested for stabbing her ex-boyfriend in the stomach during a fight in Ondo State.

It was gathered that the victim identified as Lomi Alara Akinbinu allegedly pounced on the suspect and started beating her after she told him their relationship was over.

According to the Nigerian Tribune, the relationship between the two lovers turned sour after the single mother of twins started receiving attention from a new lover.

A source in the area told the publication that the victim had visited the suspect’s home at Iyalaje market area in Ondo West Local Government in early hours of that day but met her twin children and gave them the sum of N500, then left.

The source said the victim returned to the house in the evening only to meet Sola and her new lover. She told him to leave her house as she was no longer interested in him.

Irked by the development, Akinbinu demanded the return of the N500 he gave to the twins and insisted that he wouldn’t leave without collecting the money.

Sola said she refunded the money however a fight ensued between the two old lovers and the man was stabbed in the stomach.

“My ex-boyfriend came to my house in the afternoon and gave my twins five hundred naira for feeding. In the evening, he came back to my house and said he would come and sleepover at my place in the night,” the suspect explained.

“But I told him that I am not interested in him anymore. Then he requested the money he gave my twins and I gave him the money immediately. Suddenly, he started beating me

“He beat me because when he came to my house, he met my present boyfriend with me. He was angry and started beating me. So, when I knew he had overpowered me, I used a knife to stab him in his stomach.”

The victim was rushed to the Trauma Centre for treatment while the suspect was arrested and charged to court.