Symptoms of cervical cancer:4 Warning Signs of Cervical Cancer You Should Not Ignore. 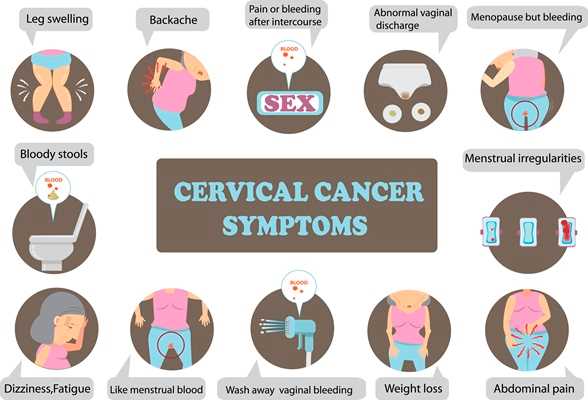 Cervical cancer develops when there are abnormal cells in the cervix that end up growing out of control. The presence of HPV is what sometimes damages the cells. The cervix is located in the lower part of the uterus which then opens up into the vagina.

As mentioned above, HPV is one culprit in the cause of cervical cancer. Most cases of cervical cancer are as a result of HPV. HPV is of different types and some cause genital warts while others cause no symptoms at all. Anyone can get HPV when they come into sexual contact with someone who has it.

A change in the cervical cells is detectable and can be cured before it gets to cervical cancer. This is done using a Pap test where the doctor scrapes off some cells from the cervical wall and then takes them for analysis. Women should have this test done regularly so as to catch any changes in good time.

If the abnormal cells develop into cancer, these are the symptoms of cervical cancer that will present.

Diagnosis is via a Pap test. The doctor scrapes cervical cells and examines them for any abnormalities. If any abnormalities show up the doctor will conduct further tests to find precancerous or cancer cells. In the event that you already have symptoms of cervical cancer, the doctor may take a tissue sample for tests.

Treatment includes chemotherapy, radiation therapy and surgery depending on the stage that the cervical cancer is in. Surgery can include hysterectomy (removal of all or part of the uterus) and removal of pelvic lymph nodes. This could also involve removal of both fallopian tubes and ovaries. Sometimes a combination of these methods is used.

Cervical cancer in your teen

Statistics show an increase in the number of young women and girls with cervical cancer. This is due to the fact that girls are having sex at a younger age these days. This is a very unfortunate situation but parents must stand up and face it head on because it is a reality.

HPV is preventable using a vaccine that can be obtained from certain health facilities. The prescribed age for this was 25 but the social changes experienced necessitated a revision of this age. Young girls between 12 and 13 started receiving this vaccine in 2008 in the UK. Other prevention methods include regular screening and use of a condom during sex. Condoms may however not offer adequate protection because skin-to-skin contact of genital areas can still lead to infection.

Regular screening is also a good method of prevention because any abnormalities can be caught in good time. Women between 25 and 49 years should go for screening every three years while those between 50 and 64 should do so every five years.

Cervical cancer is rare in teens and girls under 25 but infection is still a possibility. The best thing a parent can do is talk to their daughters about sex and its effects early enough. Children can easily learn about sex from their peers and it is happening at a much younger age these days. Take control of the situation and pass the right information to your children and in good time.