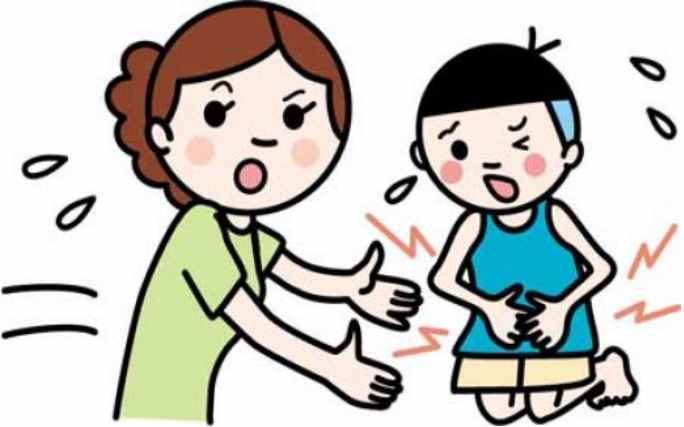 Toddlers tend to eat very many things, whether edible or not. This may sometimes lead to food poisoning and cause extreme discomfort in the child. Symptoms of food poisoning are similar to those of a stomach infection and these include nausea,abdominal cramps, vomiting, fever, diarrhea, headache and aches.

Food poisoning may begin to show as soon as the food is taken or even 48 hours later. The symptoms may last a day or so but it could last longer for extreme cases. There are some common bacteria that account for most of the food poisoning cases and a group of viruses known as noroviruses.

It is the most common and is found in raw or undercooked poultry and in unpasteurized milk. It can also be found in water. It is not communicable but you may get it from your child if he has it and has diarrhea at the same time and you clean him up.

It can also be picked up from dog or cat stool. It lasts between two and five days but can stay on up to ten days. It may present with or without symptoms though.

This is transmitted by the tiniest amounts of cow feces. Someone with E. coli can spread it if they don’t wash their hands after using the toilet. This bacterium is life-threatening in young children and may call for hospitalization. Its symptoms include painful cramps, severe and/or bloody diarrhea but with a minimal fever.

It is also known as calicivirus or Norwalk-like virus (NLV). It is rarely diagnosed though because the lab test required to detect it is not widely available.It comes with severe vomiting and can present within 24 or 48 hours of contact.

It is highly contagious and can be spread by contaminated surfaces, food and utensils. Due to the mode of transmission it can be found in homes and even daycare facilities. It goes away within two days but you need to make sure that your toddler remains hydrated throughout.

This can also be found in raw or undercooked poultry, eggs, meat, seafood, dairy products and raw milk. Symptoms start between 8 and 48 hours after initial contact and they can last about two days. It may however stay on for a week and continue existing in the body for months. It becomes bad if the affected person’s immune system is compromised because it can get into the bloodstream and cause a threat to life.

Symptoms include diarrhea, fever, abdominal cramps and small pink spots on the skin.

It is a rare condition caused by Clostridium botulinum which is a bacterium found in soil. It is however passed through food that is improperly canned or preserved. These include raw or smoked fish, cured pork and ham, honey, home-canned vegetables and corn syrup. Children can get it by ingesting the bacteria or its spores and then it continues to grow in the intestinal tract.

Symptoms include problems swallowing, constipation, droopy eyelids and general weakness. They can appear within eight to 36 hours and if untreated can cause respiratory and muscle paralysis.

You should call a doctor as soon as you suspect food poisoning. Explain all symptoms to the doctor especially if the fever is very high, the baby has a hard tummy, severe headaches and there is blood in vomit or stool.

You should keep your child hydrated. Give a lot of water but no sodas or juice because these may aggravate the situation. An electrolyte solution in the right amounts can also be given to replenish electrolytes lost through vomiting and diarrhea.

If the toddler has a fever you can give a pain reliever like ibuprofen or acetaminophen. Young children should not be given aspirin because it predisposes them to Reye’s syndrome which is rare but fatal.