6 BEHAVIORS TO AVOID WHEN DEALING WITH CONFLICT IN YOUR MARRIAGE 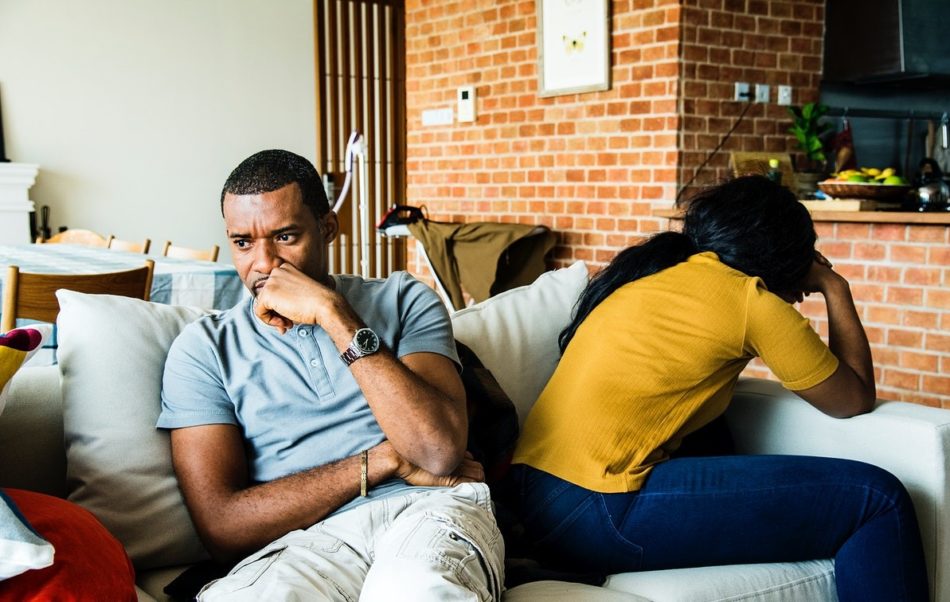 Have you ever been in the middle of a fight with your partner and you are wondering what you were really fighting about? When it comes to dealing with conflict in your marriage, more often than not, what you are fighting about isn’t about surface stuff. Sometimes, even though you know better, you still want to react to your partner without really thinking about it first.

Well, you are not alone. When you are pissed off, it is normal for your instincts to kick in and make you argumentative and defensive. Your husband can get on your last nerve, and your wife might be driving you crazy. It happens to the best of us at some point, but how you handle the emotions and how you make use of good conflict management tools are important to maintaining a healthy marriage.

So with these in mind, and with the aim of achieving peace in your marriage during a conflict, here are 6 behaviors you should avoid when dealing with conflict in your marriage.

For many people, this is usually the go-to action when there’s conflict. Because you want to be right, you try to fight unfairly so that you can “win.”

But instead of cutting corners, you and your partner need to focus on improving on hoe you argue and fight while also working on compromising, apologizing and moving on from the argument. Don’t try to guilt-trip your partner with statements like, “remember when you…”

You need to vent your frustration and anger in a way that doesn’t push you into relationship breaking traps like contempt and criticism.

Your efforts to fight fair should also be motivated by your desire to be a good example to your kids. As they watch you struggle to resolve your conflict in a healthy and loving way, you are showing them what it means to love unconditionally.

Sometimes you can’t really help your initial reaction and you snap. But then time goes by and you start finding it difficult to apologize. Pride and defensiveness give you an excuse for your behavior instead of just apologizing first.

There is a saying that if at first, you don’t succeed, apologize quickly. A simple ‘I’m sorry,” is sometimes more powerful than saying, “I love you” when it comes to dealing with conflict in your marriage.

REFUSING TO TABLE THE ISSUE

Yep, a very bad idea. Some couples keep whatever is bothering them to themselves instead of tabling the matter. They mull it over, they let it stew until it becomes something twisted within them.

But one thing many couples that overcame their marital conflicts found out is that if you can’t talk civilly about something….then don’t talk. Go for a walk, watch a funny meme or hold on till morning to table any issue that needs to be resolved.

Sure, it is really hard to table a conversation but it pays to schedule a difficult conversation for a later time – emphasis on schedule…not ignore. You will forgo a lot of heartache by picking a better time to hash out an issue instead of ignoring the matter.

When the fight is at its hottest, it is very tempting to want to make your partner feel like he or she is the problem. You refuse to articulate your frustration with care and you make the issue all about them.

But if you want to resolve the conflict, you need to phrase your concerns as if both of you are working together outside the problem. Both of you will see the same set of facts in your own unique point of view which is valid, so instead of making emotionally charged statements like, “you always forget to pay the bills,’ try to understand the issue from their point of view by saying, “the bills weren’t paid yesterday, how can we remember to pay it next month?”

The former statement puts your partner on the defensive while the latter externalizes the issue and opens up a dialogue to finding a solution to the problem with your partner.

STARTING EACH STATEMENT WITH “YOU”

This point is usually the difference between a constructive discussion and an unproductive fight. It might seem minor but making use of “you” instead of “I” can make a difference in how your spouse reacts during a conflict.

So instead of starting the conversation with, “you really annoy me with your mess,” start with something like, “I feel aggravated when the house is a mess.”

Again starting the conversation with “I” invites dialogue whereas starting with “you” would only be inciting criticism and blame. Nitpicking can eat away at a marriage but understanding strengthens your bond by softening your hearts.

You are in the middle of a fight, it is normal that you’ll want to have some time to yourself, the mere sight of your partner pisses you off that you cannot even bear to be near them. But here’s the interesting thing, for some couples, holding hands for example, or sitting close together while discussing an issue helps to ease the tension during an argument.

Did you know that touching helps to foster intimacy in a relationship thanks to oxytocin, the bonding hormone? Yep, while some couples may need some time to cool off before reconnecting, it is essential to break the touch barrier during a conflict to avoid coldness in the relationship.

Marital bliss means loving one another through challenges, disagreements, and imperfections, no matter what.

You can’t be discouraged by the inevitable conflicts that will arise in your daily lives, instead, you should avoid certain types of behaviors that can escalate the conflict and arm yourself with tools to help resolve and repair the conflicts compassionately and quickly. To make it work, you have to decide that you will not be the gasoline, but the water that focuses on defusing the situation and creating peace in your marriage.