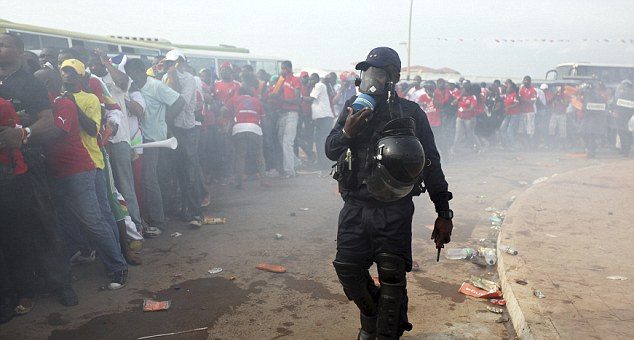 There was anger in Effurun, Uvwie loca government area of Delta State after mobile policemen attached to a politician tear-gassed a nine-month-old baby and two other children.
The children were bombarded along with their father and mother following a disagreement with between the father and the politician, identified as Chief Michael Johnny.
The policemen went berserk, attacking Johnbull Cleopas, a former council lawmaker in Bayelsa, beating him and releasing tear gas on him and his entire family inside his car.
Narrating his ordeal to The Nation in Warri Friday, Cleopas said he was returning home with his family at about 4pm on Monday and decided to stop by at the New Layout Junction market to pick a few things for household use, adding that he was entering his car when one of the mobile policemen, who were clearing the road for the personality they were escorting hit his car, destroying one of the trafficator.

”I was asking ‘officer why now’ and before I knew it, because one of my legs was already inside the car, trying to enter the car, the guy had come round to the driver’s side and started punching me; my mouth and all over and injured me.

”Thereafter, they began to use their teargas to spray me. I fell inside the car, holding my face and I started shouting ‘my children are inside the car o’, but he continued spraying into the car. It took the intervention of the market women to come and rush my children out of the car and used kerosene and handkerchief to wipe their faces. The small one, who is 9 months, was already foaming from his mouth and nose”, he narrated.

He said he went on to the Ekpan General Hospital to seek medical attention for his family and and himself and later went to the Warri area command of the state police command to report his experience. He said he could not make the report as many Ijaw people had started calling him, adding that the owner of the convoy, Johnny, had already asked people to prevail on him to drop the idea of making it a police case.
He, however, said he suffered a worse experience later same Monday evening when he was further pressured by the people sent by Johnny to plead with him to drop the matter to follow them to Johnny’s house, as he (Johnny) desired to see him.
The story, he said, changed when he go to the APC chieftain’s house and he started shouting at him forever attempting to drag him into a police matter. He said Johnny eventually asked some of the policemen who had brutalised him and his family earlier in the day to drag him out of his compound.

”As I said I wanted to go, Michael Johnny said I had insulted him that I was not going to leave he compound. The next thing was he just told the Mopol and they started bundling me, dragged me on the floor to a Hilux parked outside. 8 of them pushed and dragged me into the Hilux and took me to Ekpan Police Station and detained me till yesterday morning. They didn’t tell me my offense”, he explained.

When reached for his response to the development, Chief Johnny said it was a matter between Cleopas and policemen, which had nothing to do with him, adding that he did not see the victim when he came to his house.

On the allegation of the second assault on Johnbull in his house, Johnny said ”

it’s true, I don’t even know what transpired between him and my police. When he came I didn’t even see him. It’s like the police had already gone to do their own report before so they were already looking for him. I didn’t even see him, it’s just a fabricated story that Johnbull is bringing out”.

When reached for comment on the detention of Johnbull in his station, the Divisional Police Officer of the Ekpan Police Station, CSP Chris Sogbara, said he was not aware of the matter, promising to get across to his station, as he was not around, and get back with details later.