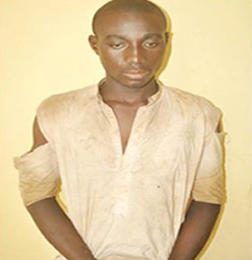 Niger state police command have arrested a 19-year-old boy identified as Aliyu Basala Yakutchi, for allegedly selling his 6-year-old brother to a ritual killer for N20,000.

Upon interrogation with the police, Aliyu confessed to have sold his younger brother, Yamusa Ibrahim Yakutchi, to 30-year-old Legbo in order to raise money to pay his wife’s bride price, New Telegraph report.

Aliyu further revealed that, he sold his brother on credit.

“I decided to sell my younger brother for N20,000 on credit so that I can raise money to pay for the bride price of my 14-year-old lover.

I took my younger brother, Yamusa, to Malam Legbo for money rituals because he promised to pay me N20,000 if he succeeded in using him for money rituals. I wanted to use the money to finance my marriage to Fatimah.

Our father is dead, but our mother is still alive, her name is Hajiya Yakure. Prior to my arrest by the police, I had not been paid by Legbo. The money might not even be enough for my marriage requirements”, Aliyu said.

When asked the whereabouts of Legbo, Aliyu said:

I think he ran away with my brother when he got the information that the police were looking for him. I blame the devil for pushing me into hatching this evil plan against my brother. I don’t even know where Legbo has taken my brother to”

Unaware of the gravity of his offense, he pleaded with the police to release him unconditionally so that he could go and tend to his farm.