A Shocking Testimony about Buhari 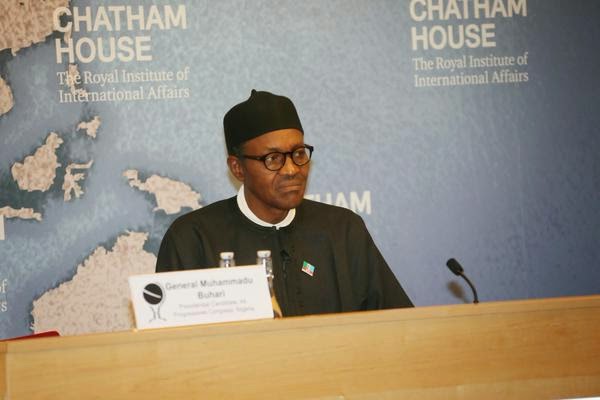 Noble Abe says he just had to share his testmony. He is Chairman, Mac-Canon Industries, and Former MD/CEO Oil and Gas Free Zone Authority. Read..

I am appalled by the direction our dear country is going. A nation where honest men and women of integrity are vilified and denigrated while thieves and people of dubious character are celebrated and treated as heroes, is a nation that has lost its soul.

It is now virtually a crime to live above board because you are looked down upon and called unprintable names, while murderers and robbers hold their heads high and are treated with utmost respect by society. Something is obviously wrong with this scenario and everything must be done to restore normalcy otherwise our future generation will likely live in a society that has lost all its moral values.

I am not a politician, but I am a friend of General Muhammadu Buhari and the things that have been said about this exceptional Nigerian will make the stomach of anyone who truly knows him sour.

Nigerians cannot stand up to him when it comes to character and integrity. It therefore
appalls me when people whose only credentials are that the Economic and Financial Crimes, Commission (EFCC) has stopped chasing them around because they know how to double speak now have the audacity and effrontery to question the character of a man like General Buhari.

I do not make a joke of it when I say General Buhari is an exceptional Nigerian and an incident which I want to share here with Nigerians gave me that conviction a long time ago and greatly influenced my own life as a public servant.

I lived in the United Kingdom in the 90s and in the late 90s I was encouraged to return to Nigeria by my friend General Buhari. It also coincides with when he was Chairman of the Petroleum Trust Fund (PTF). I used to spend most of my time in Nigeria with him and his family and I noticed that his two grown daughters who were undergraduates at the Ahmadu Bello University, Zaria, were always at home because of the unending strikes in Nigerian universities at the time.

Because of how busy he was at the time, it sometimes took days to find a moment alone with him, so I finally did find a moment alone with him, and I brought up the issue of his kids always being at home on strike and suggested his sending them to the U.K to school. I quickly brought out the brochures and prospectus and I believed I made a very strong case. He then asked me what the cost would be and thinking the cost would not be an issue since I was speaking with the head of one of the most powerful and richest institutions in the country at the time (as well as a former Head of State of Nigeria), I boldly opened the cost pages of the brochures and tried to work out the cost to him.

What he said at the time stunned me. General turned to me and asked me where I expected him to get that kind of money and I could not believe the question as I am sure many Nigerians will not believe.

First, I could not believe that as PTF chairman, he would find the school fees an issue. Afterall, he was presiding over what was unarguably the richest public institution in the country at the time and others in his shoes would have found a way to “afford” it from their public offices. But not General Buhari.

What he did at the time made me see him as an exceptional Nigerian and you are all free to confirm or verify this. General Buhari sold the only property he owned in Victoria Island at the time and it was with that fund that he sent his kids to school.

I do not know of many Nigerians who as PTF Chairman would have done what he did and, from then on, General Muhammadu Buhari became my hero and the epitome of integrity and honesty in public office to me. The General Buhari I know will never come out to claim a qualification he does not possess and for charlatans and people of questionable character to call for his arrest for forgery is a great insult to honesty itself.

I know that Nigeria has become a country where anything goes, but insulting our heroes because of politics should not be one of them. This is just one instance, as there are several instances that I can cite here, but time and space will not permit me.

So, let’s put politics aside and celebrate our heroes, because I do not know of any man of greater integrity than General Muhammadu Buhari (GMB).