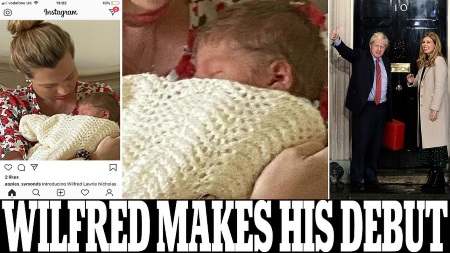 In an image shared on Ms Symonds’ Instagram, the first-time mother was seen tightly cradling her son, who sported a full head of hair not dissimilar to that of his father.

A heart-warming caption revealed the boy’s full name as Wilfred Lawrie Nicholas Johnson, with Lawrie a reference to Ms Symond’s grandfather and Nicholas a tribute to the two doctors that ‘saved Boris’ life’.

She also revealed for the first time that Wilfred had been born at the maternity wing of University College Hospital in central London.

‘Thank you so, so much to the incredible NHS maternity team at UCLH that looked after us so well. I couldn’t be happier. My heart is full.’

Ms Symonds, 32, delivered the boy at an NHS hospital in London on Wednesday morning with the Prime Minister at her side, days after he himself had been released from medical care following a lengthy battle with coronavirus.

Downing Street said the Prime Minister, who is back leading the country in its fight against the Covid-19 crisis, would plow on with his duties and take a ‘short period’ of paternity leave later in the year.

The new family are planning to live in their Downing Street flat along with their dog Dilyn, the Number 10 spokesman confirmed.

Downing Street declined to say whether the baby was born prematurely and the spokesman was unable to provide details of the weight, timing, nature or location of the birth.