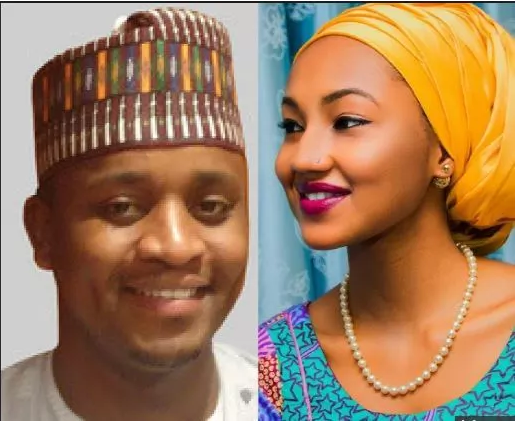 According to reports, the wedding between 21-year old Zahra Buhari and Ahmed Indimi, which was to take place this weekend, has been rescheduled.

Dailytrust, reports that the new development came as a result of President Buhari’s insisting on a low-key wedding.

However, THISDAY, also did their findings reporting that the wedding was postponed following some issues concerning the delivery the dowry boxes.

Trouble started on November 18, during the traditional introduction ceremony, when the sister of the groom, Yataka Indimi, insisted on taking her mobile phone into the Presidential Villa, Abuja, contrary to security protocol.

THISDAY gathered that Yataka wanted to record all the proceedings, including the delivery of the boxes made by the French luxury brand, Louis Vuitton, with her mobile phone, despite the fact it was against standard security protocol in the villa.

In line with the Hausa/Fulani tradition, the boxes, according to sources, contained cash, jewelry, clothes, bags, shoes and other gifts valued at several millions of naira for Zahra and the first family.

However, a struggle ensued between Yataka and the security officials who tried to compel her to comply with protocol, only for her to resist. The incident attracted the attention of other dignitaries who tried to stop the scuffle.

According to a reliable family source, the argument degenerated to a scuffle, compelling the wife of the Nasarawa State governor, Mrs. Tanko Almakura, to step in to stop the altercation from getting out of hand and may have injured her arm in the process.

“As of today, we learnt that the Nasarawa first lady is still nursing her wounds and is being treated for a dislocation,” the source said.

THISDAY learnt that the incident was so embarrassing that it incurred the wrath of the president over the behaviour of the Indimis.

Indeed, Buhari was reported to have threatened to return the boxes and stop the marriage ceremony that had been scheduled to climax on Sunday, December 4.

“We learnt that the president who was displeased with the development and behaviour exhibited by the Indimi family, vowed to return the boxes and not approve of the marriage.

“The president was also of the view that the gifts were too expensive and incompatible with his modest lifestyle and has asked the Indimis to take the boxes back.

“I think we must give it to the president for taking this stand, and cementing his reputation for not tolerating indiscipline,” a source close to the presidency said.

However, elders close to the Buhari and Indimi families are at the moment trying to prevail on the president not to return the boxes, as he would be bucking tradition.

They are also working on resolving the tension that has arisen since the altercation, so that the wedding could go ahead as planned, if not this weekend, then as soon as possible.

Further findings revealed that while Buhari might not be favourably disposed to the idea of marrying out his daughter to a wealthy suitor, the wife of the president and her daughters, who are more liberal, are rooting for the marriage.