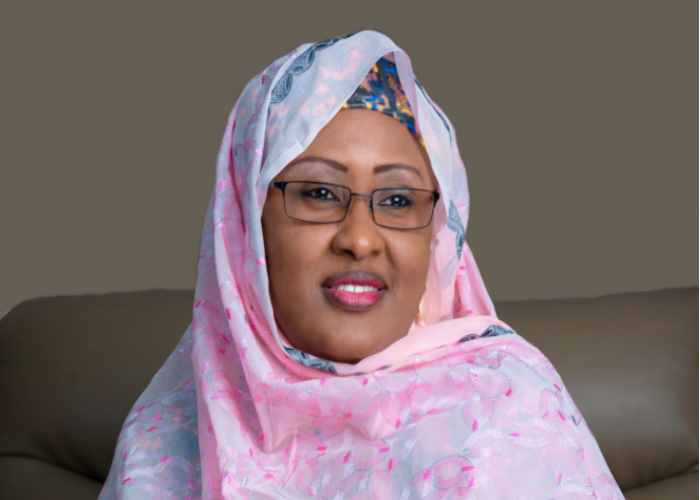 Hajia Aisha Buhari, wife of All Progressives Congress (APC) presidential candidate, has exposed how people in politics use

various methods and tactics to trick people and loot the nation.

Aisha Buhari, who addressed a women rally put together by Edo State chapter of APC at the Samuel Ogbemudia Stadium in Benin,

stated that politicians use religious beliefs as a tool to loot and deceive Nigerians, Nigerian Tribune reports.
She also referred to her husband, Gen. Muhammadu Buhari, as a leader, who is devoted to ensure that the country is sanitised.

She in addition denounced what she referred to as a high rate of girl-child trafficking in Edo State, attributing the problem partly to what she called “unemployment factor.”
“Insecurity, girl-child trafficking, suffering of widows in the South-East would become history when Buhari becomes president,” Mrs Buhari assured.

She, for that reason, advised the women to get their permanent voter cards (PVCs) and not to sell them, as she called on them to vote for APC and secure their freedom.

As part of his speech, Governor Adams Oshiomhole said the issue of Nigeria was not Christian or Muslim, but who is going to fear God and provide basic needs of life.

“We need Buhari, a man of honour, a man of courage,” Oshiomhole said, adding that “if you are happy with the way our country is, vote for continuity, if you are not, vote for change.”

The fairly subtle Aisha Buhari have been seen in the media primarily because of her women campaign rallies across the country.
At the start of numerous presidential campaigns in late 2014, Aisha Buhari was seldom seen together with her husband unlike her counterpart, Patience Jonathan, who made many derogatory claims against General Buhari and the APC.
In reaction to Patience Jonathan that has been campaigning that Gen. Buhari will jail his political opponents if elected President, Aisha Buhari said the first lady shouldn’t be frightened of jail.