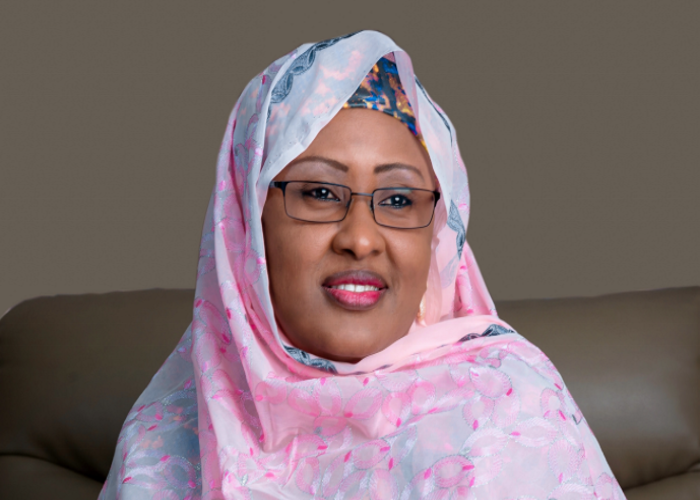 First Lady, Aisha Buhari has revealed that it was Ahmed Bola Tinubu, national leader of the All Progressives Congress (APC), who convinced her to join the campaign train of Muhammadu Buhari ahead of the March 28 presidential election.

Aisha was absent at Buhari’s campaign rallies until January 13, when she was unveiled at an APC rally at the M.K.O. Abiola stadium in Abeokuta, capital of Ogun state.

But speaking on Saturday night at the banquet hall of the presidential villa when she hosted Nigerian women and youths to an appreciation dinner for their support towards her husband’s victory at the polls, she said she was focusing on the home until Tinubu stepped in.

She denied speculations that her husband kept her in purdah (Islamic seclusion) during the campaign.

“It was my personal decision not to come out for campaign because I needed to take care of the home front while her husband was in the field campaigning,” she said.

“It was Asiwaju Bola Tinubu who talked me into it before I decided to join the train. I have never been in purdah since I got married to my husband.

“My husband is a very gender sensitive man with many daughters. He even allowed me to go to school and to cut the long matter short, he is the pillar of my success.”

She expressed concerns about the “drastic reduction” in the number of elected women in governance, saying that national and state assemblies are the worst hit.

“We must all make case for the fair representation of women and other challenges facing them, especially the high rate of divorce in the north and harmful widowhood practices in some part of the south east.

Also, the issue of sexual harassment of female students in our tertiary institutions must be checked.”

She called for the speedy implementation of the Violence Against Persons Prohibition (VAPP) Act.

Also speaking, Dolapo Osinbajo, wife of the vice president, thanked the women for their support and urged them to continue to promote national unity.

“Nigerians are people with strong faith; we as women must wake up and defend its unity,” she said. “It is time for us to stop fragmenting this country; Nigeria needs something new. A new Nigeria means a new You.”

Rotimi Amaechi, former Rivers state governor who was also director-general of the Buhari/Osinbajo presidential campaign organisation, was chairman of the occasion.

Other dignitaries were Toyin Saraki, wife of the senate president; Gimbia Dogara, wife of speaker of the federal house of representatives; and Victoria Odigie-Oyegun, wife of the APC national chairman.