Alaafin Of Oyo’s wife, Queen Ola accused of having an affair with Kwam 1 confirms divorce 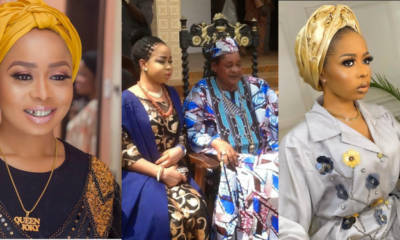 Olori Ajoke, one of the  wife of Alaafin of Oyo, Oba Lamidi Adeyemi has confirmed rumour that she has parted ways with the kings.

There were reports that Queen Ola was sent out of the palace following an allegation that she was having an affair with Fuji maestro, Wasiu Ayinde Marshal aka KWAM 1, an allegation both parties had denied.

The monarch recently celebrated his 82nd birthday was celebrated by his wives except for his estranged queen, who does not associate herself to the king anymore and has blocked all other queens from her social media handle.

Sources had said that she left and was not sent packing.

“Iku Baba Yeye did not send her packing. She was the one who left him after all that happened. Baba was the one who sent her to school and now that she has graduated from the University of Ibadan and serving as a Corper, is this how to repay him? Well, she has three kids for him and that cannot be erased from her life,” the source confirms.


WHATS ON
Alaafin of Oyo