Residents of Shodipo Estate, Agbara, Ogun state had their eyes on stalks Friday morning as they trooped to watch a healthy and beautiful baby girl brought to life by a female lunatic.

The incidence seemed bizarre to some who were amazed that a beautiful healthy baby was born by a lunatic while others believed it was simply a miracle from God.

It was gathered from eyewitnesses that she had allegedly fled to Shodipo for refuge after having four of her babies abducted by unidentified people. Though it is not known when or where she put to bed, some residents speculated that it must have been at midnight or early hours of Friday due to the state of the woman and baby.

PMNews reports that in his account, Comrade Femi Okeowo, a resident who rescued the the baby girl from her insane mother said:

“I was on my way to school when I saw the mad woman with the baby. Some residents were scared of taking the baby from the mother but thank God for some men in the vicinity who intervened that the child be taken from her for the fear of being kidnapped.
“I asked her to hand over the baby to me that I wasn’t going to kidnap her and she did without hesitating. I collected the child and a female resident tidied her up,” he stated. 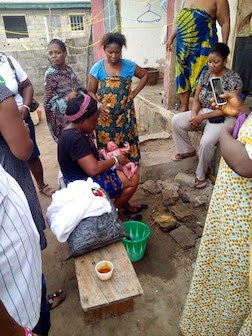 He however discarded the views of eyewitnesses that she could be feigning insanity.

“Though she speaks coherently at times but merely observing her appearance, it is so glaring that she is insane. From my own point of view, she is abnormal because her hair is very unkept. It is the work of God and it is mysterious as well for a mad woman to trek all the way from Lome and give birth in Agbara in Ogun state”, he claimed.

Another resident, Mrs Achibong described the act as ‘wonderful’.

“It is only God that can do this, that is why I call her “Gift of God”. The mother said it is only me that can give her a name, so i gave her the name: Gift of God,” she said.
“We dont actually know where she put to bed but she said she cut the placenta on her way down and threw it away.”

However, some eyewitnesses believe that the presence of the mad woman in the community will bring good luck to traders. As at press time, the woman and her baby were taken away by a Rescue Operation team from Alausa, Ikeja, Lagos state. 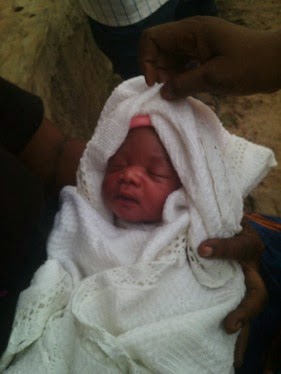