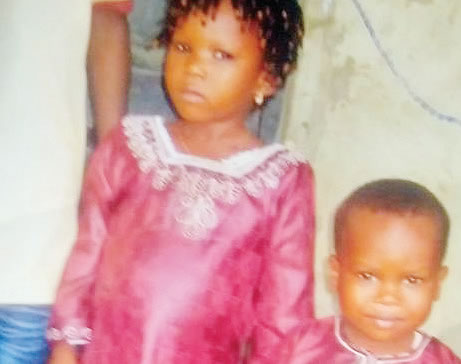 An apprentice, identified only as Grace, has allegedly absconded with the two children of her employer, Mrs. Suliyat Azeez, in the Okokomaiko area of Lagos State.The victims were identified as Farouk, 4; and six-year-old Kafayat.
According to Punch Metro,it was learnt that Grace fled with the children on Friday, less than 24 hours after she resumed apprenticeship at their mother’s workshop on Ora Street, PPL bus stop, Okokomaiko.
It was learnt that the children had returned from school and gone to their mother’s shop.Grace was said to have claimed she was going out to buy food and asked the children to accompany her.
She was, however, alleged to have absconded with the children.Nobody had her contact or knew her place of residence.
The victims’ mother, Suliyat, said she had gone for a meeting of hairdressers when the incident happened.

She said, “The girl came to my shop on Wednesday and said she wanted to learn hairdressing. I asked who her guarantor was because she said she came alone. She said she stayed with a friend in the area and she would have come with her, but the friend had gone to work.
“On Thursday, she returned and bought soft drinks and biscuits to celebrate the commencement of her apprenticeship. I even shared the drinks with people. That was the day she started working.
“On Friday, I planned to go to her place of residence, but I had to first attend a meeting of hairdressers in the community. When I returned from the meeting around 4pm, I was told nobody knew where she went to with my children and we started searching for them. I believe she hypnotised my children.”

The victims’ father, Fatai, a mechanic, said the family had reported the incident at the Ojo and Okokomaiko police divisions.
He said other efforts at finding the children had been abortive.

“The girl just identified herself as Grace. She should be about 20 years old. My wife couldn’t collect her phone number because her phone (Suliyat) was faulty. She just decided to admit her because the girl asked for help. We don’t know any of her relatives and friends,” Fatai added.

A relative, Mr. Sanni Saidi, blamed Suliyat for not getting a snapshot of the suspect, adding that it could be difficult to find her.

He said, “On the day of her induction, Suliyat could have taken her snapshot. She could have taken her phone number. But she didn’t do all these and I think she should take the blame. This shows the extent that people could go to execute their devilish intentions. How could you steal two children without any fear of God? We appeal to the security agencies to help us find the children.”

The Police Public Relations Officer, SP Dolapo Badmos, said the matter was not reported at the police stations.
She urged the parents to go back to the station nearest to them, “so that invetigation can commence.”