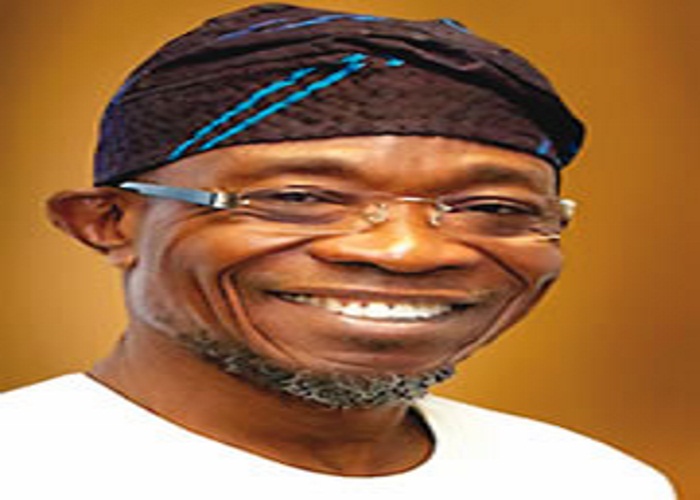 A former Deputy Governor of Osun State, Senator Iyiola Omisore, has said the administration of Governor Rauf Aregbesola took a loan of over N480bn from various sources since he assumed office in 2010.
Omisore said this at a press conference in Ile Ife on Monday.
Omisore, who is the governorship candidate of the Peoples Democratic Party in the state during the August 9, 2014 governorship election, accused Aregbesola of financial recklessness and lack of proper planning.
According to him, the loan burden and the alleged continuous wasteful spending by the governor are some of the reasons the administration has been unable to pay workers for the past seven months.
He said the governor also wasted the state’s resources on political campaigns during the last governorship poll and the just concluded general election without minding the consequences of his actions.
Omisore said, “The principal debt of Osun State under Ogbeni Rauf Aregbesola is N480bn. They took N300bn loan, by taking N10bn for each of the 30 local government councils.
“They first raised N60bn bond and later raised another N40bn bond. They borrowed for O’meal project, borrowed for school uniform project and borrowed for airport project.
“They borrowed another N25bn. But the principal debt is N480bn. You will remember that we were saying this before this financial crisis reached this height.
“I raised the alarm then that the way Ogbeni Aregbesola was running the affairs of the state, he would soon run it aground. Now it has happened.”
Omisore said since Aregbesola said it openly on Friday that the situation into which he drove the state was beyond him, he should resign honorably.
While offering suggestions on how the administration could salvage the situation, he advised that the governor should stop his ostentatious life-style and show a sign of remorse.
He said, “The governor should sell the helicopter; the helicopter has two pilots. They spend money on maintenance and so on. He should also stop using chartered aircraft. I am sure this will shock the people to hear that the governor still travels in chartered aircraft despite the financial mess he put the state into.
“He should reduce his security votes, reduce the Government House spending and stop giving Osun money to his Lagos visitors. He should bring back our money. The contracts were inflated, especially the road contract. Gbongan to Akoda, Osogbo to Kwara boundary and the Ring Road were inflated to the tune of N102bn. So, the money to workers is in his pocket. If he can bring just N50bn out from this stolen fund, the workers would smile.”
The former chairman, Senate Committee on Appropriation and Finance, said that he had been assisting people the way he could without making a noise out of it. He said if he wanted to play politics with the situation, he would station a trailer load of truck at the PDP secretariat and ask people to come and collect foodstuffs.
But Aregbesola has debunked the allegations of financial recklessness and also said the debt profile of the state is much lower than the figure Omisore gave.
The governor, who responded through his media aide, Mr. Semiu Okanlawon, in a statement, said Omisore fabricated the N480bn figure to discredit the administration.
He said, “Every knowledgeable person in Osun and beyond has the figures of the Osun borrowings by virtue of the open nature of the Aregbesola’s administration. Osun could not have borrowed in secrecy as the two bonds were in the capital market and the Sukuk Bond was taken in celebrated manners.
“While we took N14.4bn Sukuk bond in two tranches, the state government also approached the capital market for a N30bn loan.
“These are verifiable facts and which are in the public domain. So, what new thing has Mr. Omsiore said other than regurgitating the same old-fashioned, weather-beaten lies that could not help him dislodge Aregbesola in the August 9 governorship election?
“If it is not crime for a state government to source for funds for the development of the state, Omisore needs to tell us why states under the administration of his party, the PDP, are among the debtor states in Nigeria.”
The governor said the state owed its workers just as many other states were affected in Nigeria. He however stated that he was working round the clocks to ensure that the workers were paid.
He added, “For instance, the Gbongan-Akoda Road; Osogbo-Ila-Odo-Kwara-Boundary Road which Omisore has fraudulently put at a cost of N102bn all together, cost a bit higher than N60bn. While the Gbongan-Akoda-Osogbo Road costs N29.2bn; the Osogbo-Ila-Odo-Kwara Boundary is to gulp N17.8bn while the Oba Adesoji Aderemi Second Bye-pass Road will cost N14.5bn.