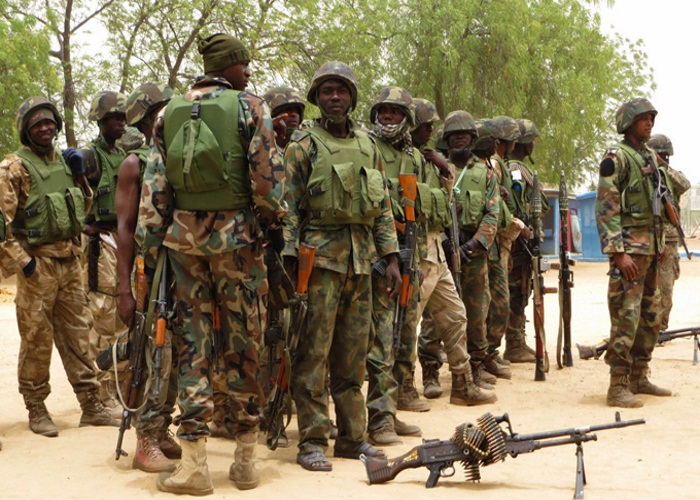 The Nigerian Army has debunked reports in the media that about 500 people, mostly women and children were abducted by the Boko Haram terrorists in Damasak, Borno State.

This is coming as the Defence Headquarters (DHQ) stated that Chadian and Nigerien troops are in charge of security and protection of the border town of Damasak in Borno State according to dictates of the memorandum of understanding (MoU) establishing the Multinational Joint Task Force (MJTF) against terrorism in Nigeria’s north east.

The Acting Director of Army Public Relations (DAPR), Col. Sani Usman, stated this yesterday during a press briefing on the activities of the Service within the period under review.

While fielding questions from journalists on the fate of the 500 people allegedly kidnapped by the terrorists, described such claims as a total fabrication.

“It is not true. Its is all lies and I don’t just want to start discrediting any news agency but this particular medium has been in the habit of dishing out false news like in more than four occasions now. Please there is no 500 people that was kidnapped”, he said.

In a related development, PRNigeria quoting military sources, said that DHQ has clarified the nature of military arrangement in the border town of Damasak, which has generated controversy recently.

According to sources, the clarification became necessary in view of a trending speculation in major international media that another 400 children and women were kidnapped and led away by Boko Haram terrorists while fleeing from Damasak recently liberated by Chadian and Nigerien troops.

The military personnel who spoke with PRNigeria wondered how fleeing terrorists who were pounded by Nigerian Air Force aircraft before being overwhelmed by forces from the two MJTF participating troops would pack over 400 individuals along with them in the process.

“Although we are not officially responding to such baseless assertions because it has become normal for some interests to manufacture something so that their media will have something negative to report about Nigeria. It is nevertheless important to let them know that troops from Niger and Chad have been in charge of protecting that town and we wonder how they would have allowed Boko Haram the luxury of such mass kidnapping?

“Were the abducted individuals herded away on foot or packed in trailers or small trucks?”, the source wondered.

Meanwhile, two journalists working for Aljazeera Television who were found to have been loitering around restricted areas where military operations are ongoing in the North East have been restrained in Maiduguri.

The DHQ in a statement published on defenceinfo.mil.ng, stated that “the journalists, Ahmed Idris and Mustafa Andy who were noted to have been moving around various locations including restricted areas in Yobe and Borno State were also operating without any protection, accreditation or due clearance.

“They were accordingly monitored by military intelligence operatives until they eventually had to be restrained to their hotel in Maiduguri. This followed the increasing suspicion that their activities were aimed at interfering with the ongoing military operations in the area.

“The motive, activities and some material in possession of these individuals are being investigated”, the statement read.

The military authorities recalled that foreign journalists have earlier been cautioned against unauthorised and unprotected movements around the military operations area.