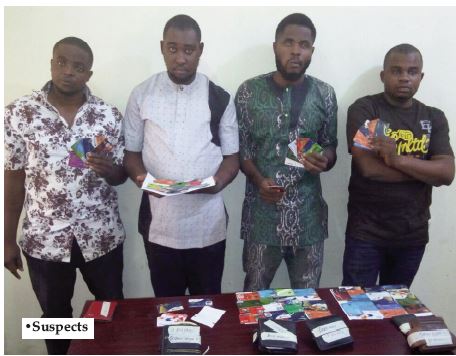 The police in Abuja has smashed a syndicate who specialises in stealing ATM cards from bank customers across the country.
The suspected members of the syndicate were identified as David Wuese, Chika Okenyi, Omotayo Bamidele and Akura Godwin.
They were arrested after complaints from members of the public to the Inspector General Police Ibrahim Idris, who deployed his operatives at the Special Intelligence Response Team (IRT) to trail and arrest the suspects.
A source disclosed that the syndicate, who confessed to the crime during interrogations, said that they normally stole ATM cards from unsuspecting victims while pretending to help them solve problems at ATM machines.
It was gathered that a member of the syndicate would approach an ATM user who was having difficulties with the machine. They would then swap the unsuspecting customer’s ATM card with another one from their own pockets after they must have got the PIN of the ATM card of the unsuspecting customer.
The suspects would then take the stolen ATM card to the nearest ATM machine where they would check the balance in the victim’s account, after which they would then proceed to purchase expensive mobile phones from the account. In other cases, the suspects will also make withdrawals to the limits of the account. The leader of the syndicate, Wuese (27), said in an interview that the syndicate was formed in Markurdi, Benue State from where they took their activities to several states in the country.

He said: “The idea behind our operation was a collective one. I cannot tell who actually brought it. But before then, we had read something similar in the newspapers, and we modified it. “Some of the ATM cards found in our possession were all invalid, and that was what we were using to steal from our victims. “We don’t operate in one state.

We move from one state to the other, and after we had succeeded in stealing a victim’s card, we would take the card to a machine where we would check the balance in the owner’s account. “If the money in it was less than N20,000, we would leave the money and move on to look for other victims. But if the amount in the account was huge, we would withdraw up to the ATM limit, then we would go to any shop where phones are sold and by phones, which we would resell at cheaper prices.
“Sometimes, we take the ATM cards to night clubs and hotels where we paid with cards. “In our last operation, we bought three Samsung Galaxy Edge for N245,000 each and we sold them for N215,000. We also bought three Blackberry Passport for N130,000 each and sold them for N90,000. We bought two Infinix phones for N82,000 each and sold them for N60,000. “I can’t count the number of operations we have done, but we normally share all the money we have made equally. “I have succeeded in buying a Toyota Camry with my own share of our loot, but I don’t know what my friends have done with theirs.