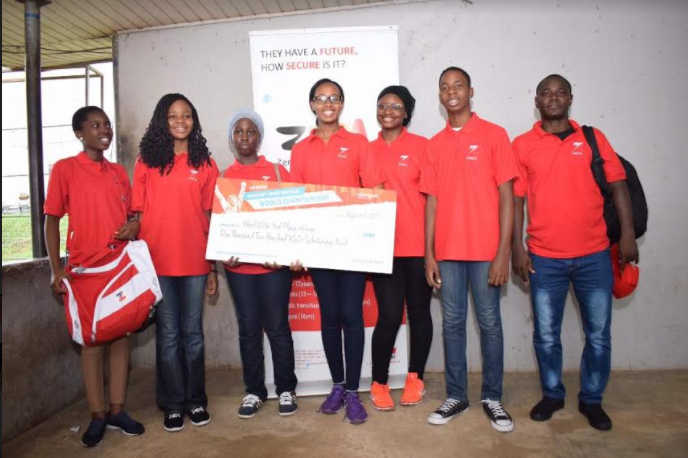 Award winning Nigerian school girl, Katerine Eta, has challenged other students to see failure as a call to put in more efforts rather than an excuse to quit.

The award-winning girl’s advice came as ReadManna, organisers of Nigerian competition that gave her the platform to compete at the World Championship is targeting more schools in order to give opportunities to more students.

Speaking at the Murtala International Airport on arrival on Saturday from the United States, Katherine said, “you shouldn’t see failure as a reason for you to quit, failure should be a reason for you to work harder to do more of what you have already done”.

“Last year I went for the world championship and I came tenth in the world and I decided that I was going to go again this year doing a different programme and this year because I work harder and because I was more determined, I came third in the world,” Katherine said, citing her own example to encourage other students.

On what she planned to do with her newly acquired expertise in the Microsoft application, Katherine said she intends to get better still at using it and then help use the knowledge to help others.

Also speaking on Saturday, Chairperson of ReadManna, Mrs. Ednar Agusto, said the organisation plans to expand the Nigerian competition in order to give more students the chance to acquire competencies in Microsoft applications.

On her motivation for the initiative, Agusto said it was borne out of the reality that competence in the use of the applications can help to increase productivity and improve self-esteem in the students.

“You know you will be able to stand and be able to do more things, it is a solid foundation in this ICT world because today, digital literacy is the language of the economy, so if you don’t know how to speak this language you are at a disadvantage, so we decided to start at the grassroots, work with the schools so that these children can have the right foundation and from there, they can move on to more advanced computer certification and knowledge,” she said.
She promised that the organisation will invite more public schools to participate in the competition, saying that only one public school, Lagos State Model College, Meiran competed in the Nigerian championship, with fifteen students representing.

For her effort, sixteen-year-old Katherine, whose attendance at the competition was made possible by Zenith Bank, received $1,500, a NuVision Solo 10 Draw Tablet at the world championship and another N750,000 ReadManna Chairman’s Prize. Wai Feng Cheng (Hong Kong) and Chi Kei Leong (Macao) came first and second respectively.

The annual Microsoft Office Specialist World Championship is a global competition that tests student’s skills in Microsoft Word, Excel and PowerPoint. Apart from Katerine, four other Nigerian students represented Nigeria at the competition which is open to all students aged between 13 and 22 years enrolled in an academic institution.

The team was accompanied to the championship by an ICT Teacher from Glisten International Academy, Abuja, Stephen Adeyemi.

The 2017 MOSWC in versions 2013 and 2016 of the Microsoft programs was contested worldwide by about 1.1 million students from 140 countries. 157 students from 50 countries eventually qualified to compete in the world finals in Disneyland, California.

This year’s championship conducted annually by ReadManna in Nigeria was held over a period of 7 months between 1 August, 2016 and 30 April, 2017 with about 882 entries from 20 Secondary Schools in Lagos, Ogun, Rivers, Kwara States and the FCT.

The competition ended with 112 out of the 161 students shortlisted for the national competiiton certified in Microsoft Excel, PowerPoint and Word.