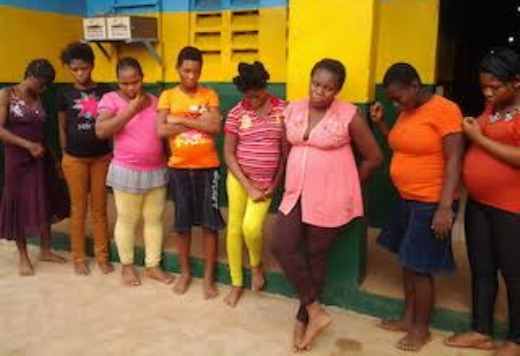 6 years ago / 694 Views
A Thomson Reuters Foundation investigative team spoke to more than 10 Nigerian women duped into giving up their newborns to strangers in houses known as “baby factories” in the past two years or offered babies whose origins were unknown.
Maria said she learned her newborn daughter had been given up for adoption for which she received 20,000 naira. And Maria is far from alone.

“The nurse took my child away to be washed. She never brought her back,” said 16-year-old Maria from Imo State.

Five women did not want to be interviewed, despite the guarantee of anonymity, fearing for their own safety with criminal gangs involved in the baby trade, while two men spoke of being paid to act as “studs” to get women pregnant.

Although statistics are hard to come by, campaigners say the sale of newborns is widespread – and they fear the illegal trade is becoming more prevalent with Nigeria heading into recession this year amid ongoing political turbulence.

“The government is too overstretched by other issues to focus on baby trafficking,” said Arinze Orakwue, head of public enlightenment at the National Agency for the Prohibition of Trafficking in Persons (NAPTIP).

Record numbers of baby factories were raided or closed down in the southeastern states of Abia, Anambra, Ebonyi, Enugu and Imo this year, NAPTIP said. A total of 14 were discovered in the first nine months of 2016, up from six in 2015 and 10 in 2014, the data showed.
But despite the growing number of raids, the scam exploiting couples desperate for a baby and young, pregnant, single women continues with newborns sold for up to $5,000. Cultural barriers are also a factor in the West African nation, with teenage girls fearing they will be publicly shamed by strict fathers or partners over unwanted pregnancies if they do not give up their children, experts say.

“In southeastern Nigeria a woman is deemed a failure if she fails to conceive. But it is also taboo for a teenager to fall pregnant out of wedlock,” said Orakwue.

Maria said in the home in Imo state where she gave birth pregnant teenagers were welcomed by a maternal nurse who liked to be called “mama” but went on to sell the babies they delivered.

“(After I gave birth) somebody told me that mama collected big money from people before giving them other people’s babies,” Maria told the Thomson Reuters Foundation in the grounds of a school compound in her village. I do not know where my baby is now,” said Maria, using a false name for her own protection.

A lot of the trade is carried out in Nigeria but authorities suspect babies are also sold to people from Europe and the United States because many foreigners continue to seek infants there despite the controversy around Nigerian adoptions.
The U.S. Department of State alerted prospective adoptive parents to the issue of child buying from Nigeria in June 2014 after Nigerian media warned that people were posing as owners of orphanages or homes for unwed mothers to make money.

“The State Department is aware of a growing number of adoption scams,” an alert on its website read.

Over 1,600 children have been adopted from Nigeria by U.S. citizens since 1999, according to the State Department website, about a third of them aged between one and two years old. The U.S. State Department did not respond to requests for information on whether any scams affected U.S. adoptive parents.
In Britain a couple was found by the High Court to have “fallen under the spell” of an elaborate fraud after paying 4,500 pounds ($5,600) for herbal treatment in Nigeria that caused the woman’s stomach to swell, media reported in 2014.
The couple only realized they had been duped nine months later when presented with a baby in Nigeria that actually was not theirs, the Daily Mail newspaper reported.
Babies, whose biological parents or backgrounds are unknown, are offered to women who have not been able to conceive naturally, according to NAPTIP and interviews with three women.
The British government said it was committed to stamping out what it calls the “miracle babies” phenomenon. “Specially-trained teams are working at the UK border to identify and safeguard babies and children who may be at risk of trafficking,” said a spokesman for the Home Office (UK interior ministry) in a statement.
Denmark suspended adoptions from Nigeria in 2014 citing concerns over forgery, corruption and lack of control by the authorities. Apart from the illicit trade in babies, Nigeria also faces the problem of domestic and international trafficking in women and children.
Human trafficking, including selling children, is illegal in Nigeria, but almost 10 years ago a UNESCO report identified the industry as the country’s third most common crime after financial fraud and drug trafficking – and the situation appears to be getting worse, according to campaigners. The Nigerian government has not ratified an internationally recognized set of rules known as the Hague Adoption Convention which meant the laws governing adoptions remain murky and complicated, campaigners said.

“There is corruption in the adoption process and that is the individual (Nigerian) states’ responsibility,” said NAPTIP’s Orakwue in a phone interview. But central government should step up its funding to NAPTIP so we can increase support to victims,” Orakwue said.

Sophie, who was not able to conceive, told the Thomson Reuters Foundation she started to develop the symptoms of pregnancy after visiting a herbalist in Enugu state in 2014. However the traditional doctor told Sophie her swollen stomach contained gas resulting from the herbal treatment rather than a fetus – but she could arrange to buy a baby.

“(The herbalist) said that she would bring me a newborn baby, girl or boy, depending on which one I wanted,” she said in the grimy sitting room of her apartment in southeastern Nigeria.

The woman said a girl would cost 380,000 naira ($1,250) while a boy would cost 500,000 naira ($1,645), said Sophie who opted for a girl. But a sense of obligation to the woman who brought her a child prevented her from reporting the crime, she told the Thomson Reuters Foundation.

“I considered everything and thought to myself ‘why should I report (the herbalist) to the police?’ She had helped me,” she said.

NAPTIP does not have data on the number of domestic adoptions that have taken place, a figure it says is not held by central government.

“In the southeastern states, the sale of babies is unarguably very prevalent as recorded by the agency,” said Cordelia Ebiringa, NAPTIP’s commander in Enugu state.

Men are also involved in the process of illicit baby trafficking, with sperm donors impregnating surrogate mothers who then sell their babies, according to two Nigerian men. Jonathan, 33, said he was paid 25,000 naira ($82) by his boss or “madam” every time he conceived a child.

“I don’t see it as somebody exploiting me. The madams pay me for my work,” said Jonathan, who withheld his full name.

Jonathan said he did not know whether the women gave their babies away or went on to sell them although he was concerned what he was doing could be illegal.

“I often think ‘what if the police catch me?'”

Nigeria’s anti-human trafficking agency said it did not have data or information on the role of sperm donors, but many women they spoke to did not want to reveal how they fell pregnant.

“NAPTIP has no records of studs that impregnate the women at the baby factories as most of the pregnant women rescued and interviewed in such cases claimed unplanned pregnancies,” said Ebiringa.

Little information was made available by the Nigerian police or authorities in southeastern states about the number or identity of the people who run the “baby factories”. No data was provided on the number of arrests by police in southern states of Enugu and Abia on baby trafficking offences despite repeated requests by the Thomson Reuters Foundation.
But the dangers involved, both from the law and from trafficking gangs, are palpable, according to Jonathan, who estimates he has fathered about 15 children as a “stud”.

“These (baby traffickers) can be dangerous,” said Jonathan, who was once threatened by a group of thugs who found out what he was doing. “They are ready to kill anybody if you stand in their way.”