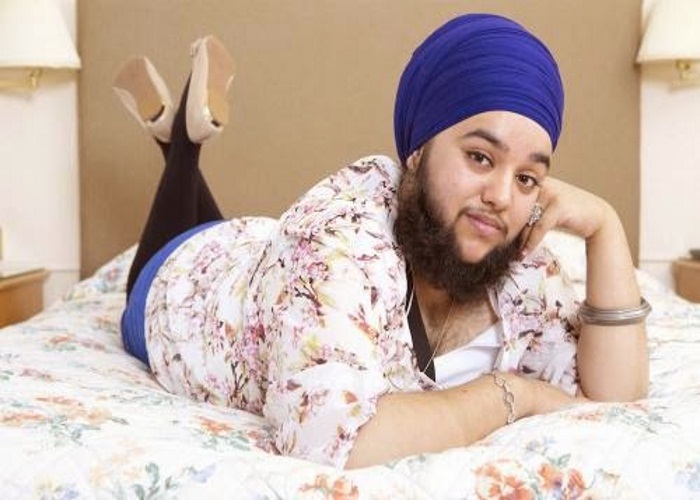 A 24yr old Harnaam Kaur, who lives in Berkshire, UK, and suffers from what doctors calls polycystic ovary syndrome (facial hair growth in women) says she now loves her beards and have stopped trying to get rid of it. Harnaam said she started growing the beards when she was just 11 years old and had to endure years of bullying and people making fun of her.

Harnaam, who once attempted suicide, had in the past tried to wax, bleach and shave the hair which also started growing on her chest and arms but finally decided to stop after being baptized as a Sikh, a religion that forbids the cutting of body hair. She’s now speaking up about her new-found confidence.

Speaking during an appearance on This Morning, Harnaam said:

“At the end of the day, I love myself and the way that I’m formed. Going through primary and secondary school with the facial hair, kids can be nasty. It led me to self harm and wanting to take my own life. It takes a lot of strength to say, ‘I want to kill myself. A split second is all it took. That thought process really empowered me to just carry on with life.

“I’m more spiritual now than I am religious, I live my life the way I see fit. I stand for what I am. To be labelled as a woman you can look however you want.”

Harnaam is now working on a campaign to show that name-calling has a big impact with anti-bullying charity Fixers and appears in a short film with her brother.