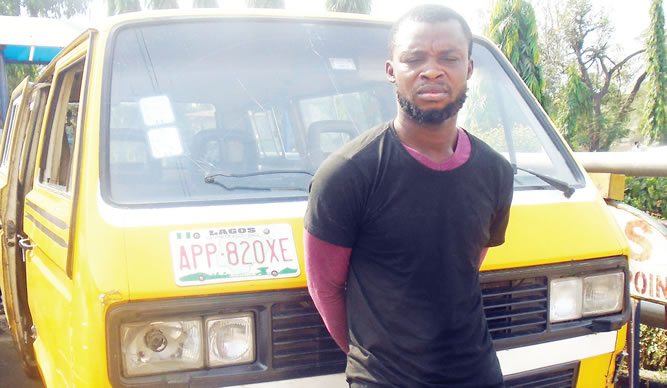 Police in Lagos,  have arrested a suspected one-chance robber, Ajibola Alao, for allegedly unsuspecting victims of their possession.
Upon interrogation, Alao, confessed to have started the evil act in order to give his siblings a much better life.

The suspect, was on Thursday, arrested by operatives of the Rapid Response Squad after robbing a resident, Asotie Benedict, of his phones and money in the Oshodi area of the state.

An official of the RRS, who spoke to Punch, said the suspect and his gang had pushed the victim out of the bus while in motion.

“The suspect, in company with the driver and conductor of their operational bus, a Volkswagen bus with number plate, APP 820 XE, picked up the victim at Ladipo. He was to alight at Oshodi under bridge.
“However, when they sighted officials of the Lagos State Traffic Management Authority at that bus Stop, they pretended they were ascending the bridge towards Oshodi Oke. It was at that point that they dispossessed him of his two mobile phones and a wallet containing N60,000. They then threw him out while the vehicle was in motion.”

The victim, via his police statement said he was given N100 as transport fare back home after pushing him out.

He stated that he, however, was not deterred as he chased the vehicle till he spotted a patrol van of the RRS and raised the alarm.

“They chased the vehicle to a halt and arrested Alao, who took all I had on me. But the driver and the conductor abandoned the vehicle and escaped.
“All they took from me were found in his possession and some additional phones, which he said they took from previous victims,” he added.

Alao, in his confessional statement, allegedly admitted to being part of a three man one-chance gang that operated in the Oshodi area:

He said, “I have been in the business of one chance since 2015. I was once a pickpocket, joining buses to Sango, Agege, Oshodi, Apapa, and disembarking after stealing from commuters.
“At a time, I was arrested by the Mushin Olosa Police station. My mum, who was ill and on admission in a hospital at that time, was brought to see me. She pleaded with the officers and secured my bail.
“She insisted that I should stop stealing from people. She added that the consequences would be too severe for me if I went back to crime. A few weeks after the incidence, she died.”
He said he went back to  crime to raise funds for his siblings so they would not feel the absence of their mother and also to secure their future.
“I went back to crime to raise funds for my siblings so that they won’t follow the same path. I am the first child and the breadwinner of the family. Since the death of my mother, I have been taking care of my brothers.

SP Dolapo Badmos, Police PRO,  said the suspect had been transferred to the State Criminal Investigation and Intelligence Department, Yaba, for further investigation.