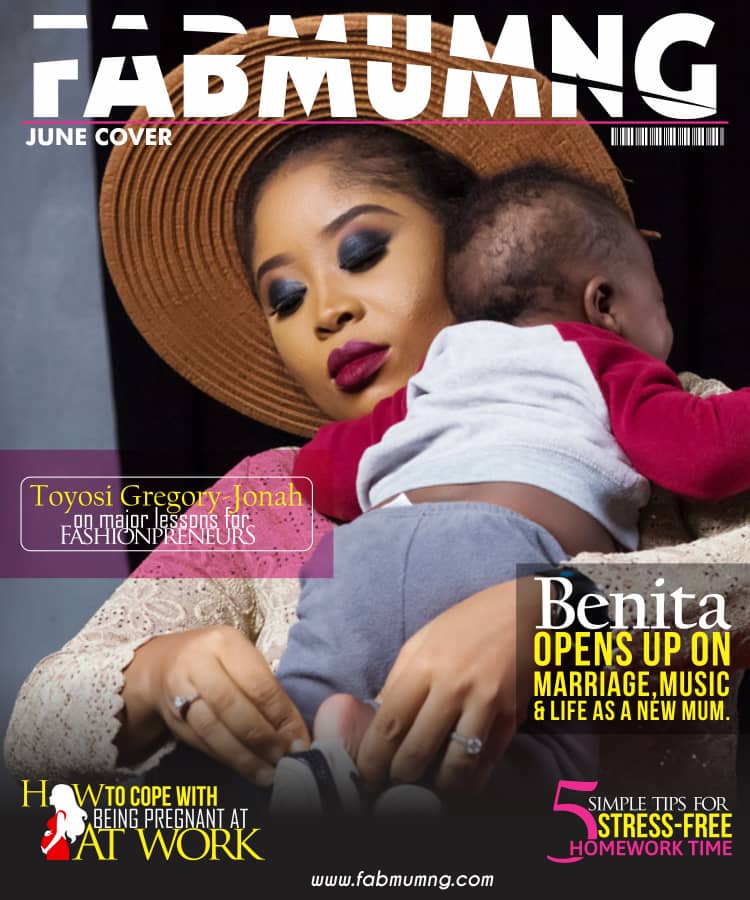 Nigerian gospel singer, Benita Okojie, who became a bonafide star when she released her evergreen track Osamudiamen in the 1990s, is now a mum.

The singer and her son are the cover star of FABMUMNG magazine June’s edition, and she talks on child birth, postpartum depression and motherhood. Read excerpts from the interview :

I think the early stage of course was overwhelming, I knew that my life had changed forever for good. I had to share my time with the new baby. It wasn’t easy because it was not something I was used to, it was a new experience for me and I thank God for the Joy of being a mother. It can be also be challenging and I understand why people have post partum depression because if you don’t have people there with you the feeling might be overwhelming for some people.

My mum and my sister were there with me during labour. My husband was also there but had to go get some items. I don’t even want to talk about labour.I was just really glad when the baby came out because I was there for 17 hours. I looked at my baby and I was like that huge guy came out of me but I thank God for counting us worthy of such a great blessing and having our families supporting us with prayers meant a lot. There were times the reality of being a new mother set in and I would go quiet. My mum would say baby blues and smile. I’m grateful for an amazing family system. Every one was helpful one way or the other. Thank God, baby A and I have grown since then.

What are some of the processes that helped you as a new mum?

My mother understood the dangers of not allowing a new mother have people around her because she may slip into depression .So she knew how important it was to have people around me. That did me a lot of good and I knew that it was easy for me to start feeling overwhelmed and stressed. I also tried as much as possible to talk when I wasn’t feeling good and I realized the more I talked about it the better I felt. There were times I realized I had to pray about these things and having people around me who supported me and prayed for me and friends who kept checking up on me and made me feel better. I kept telling myself this is a blessing, this child is a blessing so get over it and celebrate this gift so I eventually started talking to myself and I got better.

So you didn’t slip into post-partum depression?

So who were your support system?

My mother in-law, my mum, my sister and my sister in-laws. I just had so many people around me.

What can you say really prepared you for motherhood?

I don’t think anything prepared me for motherhood, honestly, the pregnancy stage was a process for me; there were days where I felt very good and there were days I was nauseous. I remember I bought lots of books; I would read and do almost all they said in the books and they’ll be like enjoy this time of pregnancy because by the time the baby comes out you wouldn’t have time to yourself and I am like what do they mean by that. They were actually right because after the baby came out of me, if I had to go out I had to consider the baby. I have learnt to plan my schedule and make sure I am at home at certain As a new mum, you learn to manage your time efficiently such that nothing suffers for another. I’m now a planner and I’m amazed at how God has helped me to spend my time wisely on what matters as I strive to achieve a balance as a mom, a wife,an artiste and other interests I have.

Are you saying what helped you so far was planning?

Yes, deliberate planning, that means if I have to be somewhere I already plan for it hours before. I know that at this time I should be back home to him and I also understand it’s important for me to go out with him. I also have mummy and son time with him, read him stories and it’s a lot of fun. I know how important it is to spend/cherish every time you spend with your child because he’s not going to be 1 or 6months forever. He’s going to grow and what you’ve deposited in him is what will help him, as he grows older. We tend to spend more time with him (myself and his dad).It’s important for us to plan our schedules well so we can create time to be part of his everyday life.

So how do you create time for yourself?

How old is he now?

He’s about 6months so it’s easier now. Even sometimes when am at home, I still get things done. I get alone time when he’s sleeping and do stuffs that are pending. There are times when he is playing and I put up cartoons that take his time for 20-40 minutes and I can do a lot with that time.

Do you have a nanny?

I don’t, it’s something I have considered before but I don’t think it is something I want now because I have support from my family. My mum and my mother in-law help a lot. They’re both eager to take care of Baby A. Anytime we have something to do. we can drop him off.

Do they all live close?

My mum lives close; my mother in-law lives not so far away. I just check up on both of them and plan which would be easier for me.

Would you say being on your own and working for nobody has helped you?

It has helped me a lot because if I was working for someone I probably would have taken him to crèche probably at 3months but I never really wanted to do that. It is also good that I am not working for anyone so my time is really flexible because I work with my own time.

In what ways does your husband compliment your parenting?

He’s learnt a couple of things and being a mother doesn’t mean it’s all on me. I try to do what I can as a mother and he will support in the best way that he can. He’s very supportive in taking care of the baby. When he was 3months I had started attending programmes and going for ministrations . He helped with our baby. He feeds him and helps with diaper change.

How do you balance your role as a celebrity mum?

I try so much to leave social media out of my own life, social media is social media and my life is different from that. But I recently started sharing some stuff about motherhood and I am sharing, educating hopefully and learning from other mum’s like me. . I definitely want to share my truth but I am very diplomatic about what I put out there So, I am very careful and I am very grateful that I have followers who are like family and sharing with them is so interesting.

I try so much to leave social media out of my own life, social media is social media and my life is different from that. But I recently started sharing some stuff about motherhood and I am very careful about how much I put out there.