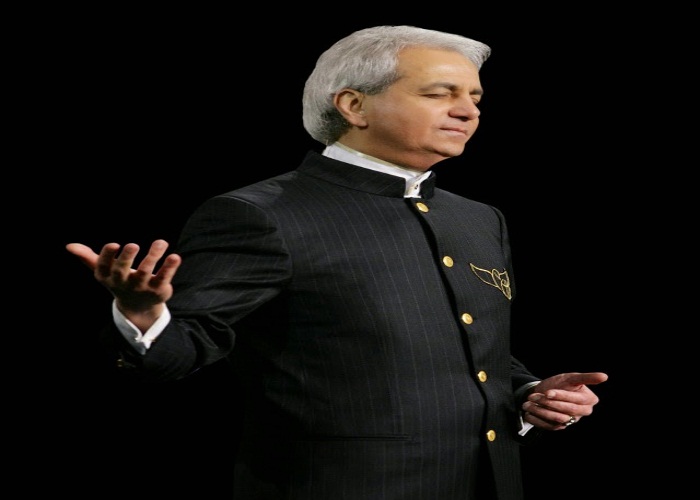 Charismatic pastor/televangelist Benny Hinn, known for his popular international healing ministry and Pentecostal styled services was rushed to the hospital Friday upon returning from a trip to Brazil which resulted in a heart attack.

Although many reports are swirling about what happened to Hinn, a letter penned by his daughter offers the full explanation and the events that led to her father’s hospitalization. Jessica Hinn Koulianos wrote that after a crusade in Brazil that had crowds of over 100,000 her dad began to feel.

“After he arrived home he suddenly began battling fatigue and shortness of breath,” his daughter, wrote in a letter posted to the Benny Hinn Ministries website, “For those of you who know my Dad, you know that he never stops; so when he spent over a week in bed, we knew something was wrong.”

Hinn, 62, is now being treated for “lack of oxygen in his cardiovascular system,” and although his daughter did not call it a heart attack, popular reports claim that it was.

“At this moment, his physicians are conducting thorough tests, the results of which have been very positive. He is alert and in good spirits, and we expect he will be released later this week,” Koulianos continued, “By God’s grace and with the help of your prayers, we are told to expect a complete recovery.”

Hinn is usually criticized for his vibrant teachings and elaborate lifestyle in the media. The popular pastor underwent a public divorce and reconciliation to his wife Suzanna in the public eye and continues to travel the world preaching the miracle working power of God.

The Hinn family has requested prayer as the Israel native recovers in the hospital. We pray that the Almighty God give him a quick recovery in Jesus name….