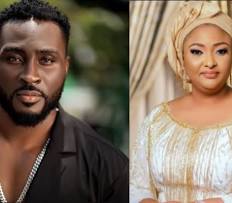 Yesterday, the big brother star, Pere was accused by Jackson Ode of having a romantic relationship with the wife of Kogi State governor, Rashida Bello.

The duo was said to have be seen a couple of times in Abuja.

However, Pere has made a post on his social media page to refute the claims.

According to him, nothing is going on between the First Lady and himself.

For the records, the publication about me and the First Lady of kogi state is a demonic lie and a figment of a diseased imagination of Jackson Ode and those retweeting that rubbish, they must answer me in court both in Nigeria and in the United States of America where he is based.