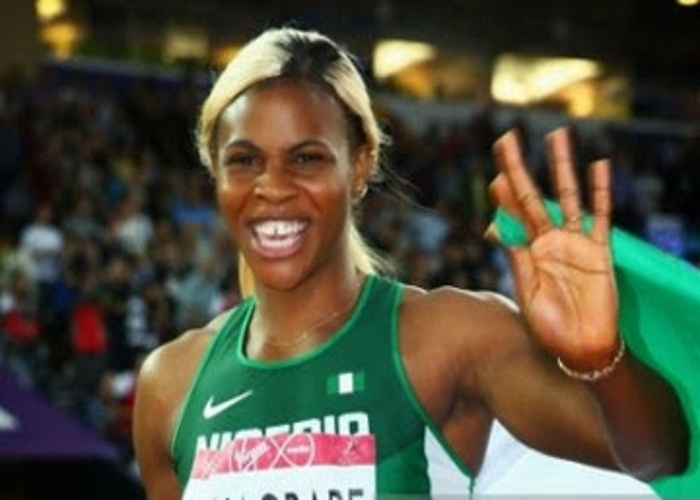 Reigning African queen of the track, Blessing Okagbare has criticize the use of her image and footage by a body said to be working for President Goodluck Jonathan who is also the Peoples Democratic Party presidential candidate, without seeking her consent.

The advertorial by GoodHouse Nigeria tagged GEJ Okagbare, which has been running on various electronic media in Nigeria and also on Youtube, the athlete said it was wrong for anyone to use her image or footage for a presidential campaign without seeking her approval. The PUNCH verified one of such videos on YouTube which expressively had the Commonwealth Games gold medallist in action. The video details achievements made by the government especially around the Nigerian railway system.

Okagbare who confirmed her displeasure over the development via Twitter from her base in Los Angeles, USA, on Thursday said that her attention was drawn to the advertorial by friends and relatives in Nigeria about two months ago.

“I just wanted to be patient at first, but my agent is not happy because he thinks I am a woman and very far from home too.

Someone out there is using my image, footage and everything I have worked for to make money through advert and campaign without seeking my approval. If an advert is being made with my footage and I am not aware of it, it shows how some of my countrymen back home can be so selfish, disrespecting and have no regard for people’s privacy.”

Okagbare added in statement sent by her agent to The PUNCH:

“Now, I am here struggling on my own to pay my coach, nutritionist, doctor and others to make sure I am in good shape for the All African Games and the IAAF World Championship in Beijing, China, later in the year, and some people back home are using my image and footage for presidential campaign advertorial without seeking for my approval.

This is fraudulent because I am totally not in support of it. We called the people (GoodHouse Nigeria) and they denied using my image and footage for PDP presidential advertorial. Who did it then? Why are they lying?”

The star athlete told PUNCH that she was condemning the act because those involved were not doing the right thing whether for sports or business.

“It is not about financial support. It is about me and what I represent,” she said.