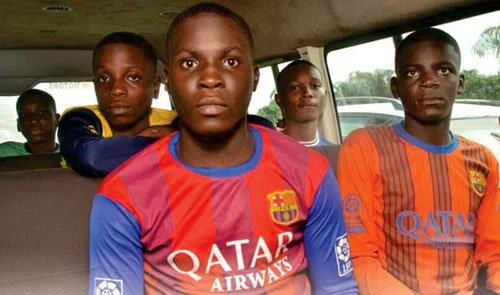 On Friday, July 28th, six students of the Lagos Model Scool Igbonla in Epe, Lagos state were rescued by police in Ondo state. They were kidnapped on May 25th and spent 64 days in the kidnappers’ den. Some of the students have recounted their ordeal to The Nation. According to one of them, the kidnappers blindfolded them and subjected them to routine beating

“We were blindfolded, kept under the bridge with our legs tied. They fed us eba and crayfish soup. They were beating us. They mixed the crayfish with pepper and water and then gave us to eat with Eba. They were giving us red water to drink. The water had a bad taste but no odour. It was polluted. They kept us under a bridge. They gave  us no bed sheets or blankets.”

“I have done my medical check up. I am fine and happy to be home with my family,” he said and paused, his mood changing immediately.

Another of the student who was kidnapped said they had to change camps thrice during their stay with the kidnappers and that they endured starvation at some point. He revealed that one of the camps was made of cut trees and the kidnappers had to erect a tent to shield them from the rain. He said that after sometime, the kidnapped loosened up and allowed them to move around as well as prepare their own meals.

His mother commended Lagos Police Commissioner Fatai Owoseni and the Commander, Rapid Response Squad (RRS) for standing by them throughout their ordeal.

“Honestly, I do not want to expose my son to any danger. It is true he fell sick in the camp because we were told then. He was kidnapped while he was recuperating from an illness and so, I think the environment they were kept and the trauma made him sick again. He was examined on Friday night and the doctors asked that we return to the hospital. But he is okay now”.