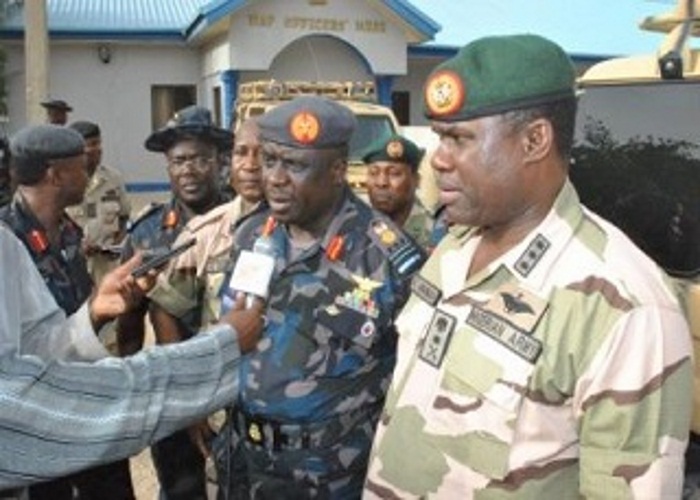 In compliance with President Muhammadu Buhari’s directive, top officials of the Nigerian Army and Air Force on Tuesday visited Maiduguri, Borno state capital, to personally assess and supervise the relocation of the Military Command and Control Centre.

The Chief of Army Staff, Lt.-Gen. Kenneth Minimah and the Chief of Air Staff, Air Marshal Adesola Amosu, flew into Maiduguri alongside other tops ranks of the two armed forces shortly after noon on Tuesday.

The service chiefs immediately moved to their respective areas of command to address the troops on ground and also make personal assessments of the ongoing relocation of the MCCC.

After their visits to their different commands, the two service chiefs later addressed a joint press conference at the 79th Composite Group base of the Nigeria Air Force before jetting out of the city.

Gen. Minimah told journalists at the base of the 79th Composite Group, Nigeria Air Force, Maiduguri, that “with the arrival of the advanced party of the MCCC to Maiduguri days earlier to carry out reconnaissance of the existing structure, “it is very clear that the movement has started”.

“The presence of the Chief of Air Staff and mine, which is the very hierarchy of the Air Force and Army here today does not mean that we are taking the battle from the General Officer Commanding, who is here”, he said. “He still commands the operation as the GOC; we will be here to add further impetus to the operation”.

The army chief said the relocated MCCC would bring about a speedy end to the counter insurgency war.

“This is war, and in war, sometimes it is not mathematics; one will do all the preparations and it does not come out as planned”, he said. “We may say we will capture an area in two weeks and it would turn out that even in a month we may not have achieved that. But we are highly optimistic that this time, with this new drive, we will conclusively bring this insurgency to an end”.

He also assured Nigerians that the army has what it takes to prosecute the war against Boko Haram giving the gains of the six weeks extension they got during the last election.

“What we have during the six weeks space given to us before the last election is still available and we will pursue the war with it, even though we still want more support from the federal government”, he said.

In his address, Air Marshal Amosu expatiated more on what the relocation of the MCCC was all about.

“The essence of moving the MCCC to Maiduguri is essentially to ease the processes of discharging authority and giving direction and the apparatus that goes along with it”, he said. “So this is what command and control is all about. In the armed forces generally, we operate on the concept of centralized control, and the executive of this centralized command is often domiciled where the operation is taking place. We are just coming in to ensure that the time that will be lost is closed up; and that is why we are now here”.

He added that with the transfer of the MCCC to Maiduguri, “there would be some drastic changes especially in the areas of speedy response of administrative demands incidental to the counter insurgency operation”.

The Air Force chief expressed optimism that the development would bring about speedy end to the Boko Haram insurgency, especially with the spirited commitments of President Buhari.