Buhari Is Creating A Big Office For Fashola In Aso Rock 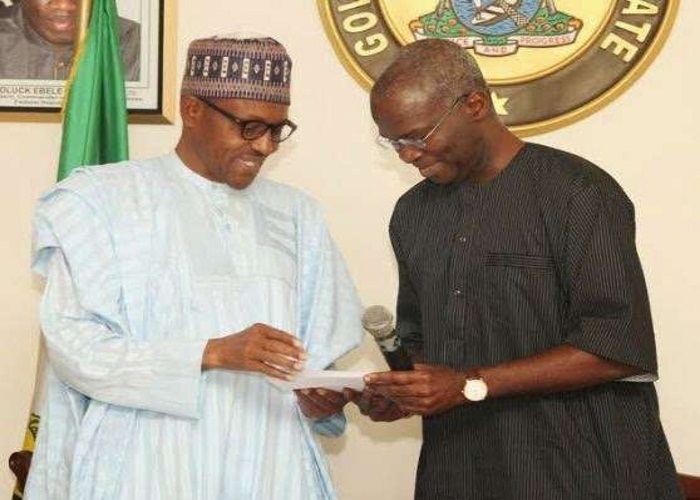 The fact is that President Muhammadu Buhari is very comfortable in working with Babatunde Fashola who is the immediate past governor of Lagos State is not in doubt. He loves his level of competence.

In fact, a source in Abuja told Naijaloaded.com that if Fashola was a Christain, he would have been the vice president now because he was Buhari’s preferred candidate, but was dropped on religious ground.

But as the jostling for cabinet posts in President Muhammadu Buhari’s administration intensifies, there are indications that Fashola has been shortlisted for a big position by Buhari.

In addition to the Chief of Staff, Fashola will be made to monitor some key institutions and agencies.

Adamu, on the other hand, may emerge Principal Secretary to the president. He is also being considered for the post of Chairman of EFCC, but has expressed reservations about heading the agency.

A frontline contender for the post of Chief of Staff is Fashola, whom Buhari personally likes and has a lot of confidence in. The president has already shown his confidence in Fashola by asking him to chair a committee he empanelled to review the 800-page report submitted by Ahmed Joda Committee.

Oronsaye, however, was recommended to Buhari by ex-President, Olusegun Obasanjo. Obasanjo is banking on Oronsaye because of his wealth of experience in the public sector and presidency affairs.

For the post of Secretary to the Government of the Federation (SGF), Oronsaye, who is from the South-south zone is also a top contender, while former Rivers State Governor, Chibuike Amaechi and a chieftain of the All Progressives Congress (APC), Chief Ogbonnaya Onu, are also up for consideration.

Amaechi, who is also from the South-south, said the presidency source, is viewed as a taskmaster but not a bureaucrat, while Onu from the South-east is well liked because of his calmness and loyalty. But the emergence of Senator Ike Ekweremadu as the Deputy Senate President have affected his chances.

Amaechi may likely take to office of SGF, all things being equal.