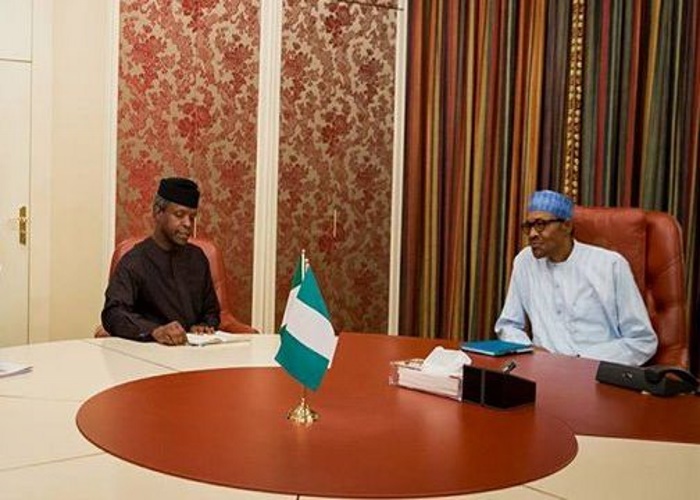 *Says President is honest & straight forward, “we work together very well.”
Nigeria has as its President at this time the kind of leader the nation needs: honest, straightforward and operating from a genuine heart, says Vice President Yemi Osinbajo, SAN.

According to Prof. Osinbajo, though some people say President Muhammadu Buhari is strict because of his forthrightness, “he is the kind of leader we need now, a president who will not cut deals and who is only interested in moving Nigeria forward.”

Vice President Osinbajo spoke today during a courtesy visit by a delegation from the Deeper Christian Life Church, led by Pastor W. F. Kumuyi at the Presidential Villa, adding, regarding the president and himself, “we have worked together very, very well.”

While acknowledging the economic situation in the country, the VP noted that the current administration did not create the conditions, “but we are here at this time.”

Continuing, he said “the reason (we are here at this time,) is known to the Lord Himself. Everyday I wake up knowing there is a cause for being here and it is to move the country forward.”

On the power sector, Prof. Osinbajo said by February this year the country was doing 5000MW of electricity for the first time in history, and then the militants’ attacks on the pipelines has made things bad not only regarding electricity, but also cutting the oil revenues of the nation. He however assured that government is working diligently on effective solutions to those challenges.

He was clear that God has a purpose for choosing the President and himself to serve at this time, saying “this is the doing of the Lord.”

Earlier, Pastor Kumuyi said he is in the Federal Capital Territory for a crusade and thought to pay a visit to the Vice President. He thanked God for the progress made so far by the Administration, adding that “God will fulfill the purpose for which He brought you at a time like this.” The Vice President thanked Pastor Kumuyi for coming, noting that “your visit is a wonderful gift.”

While inviting the Vice President to the crusade, Pastor Kumuyi pledged his contributions and prayers for the Buhari administration, and also for the progress of the country.