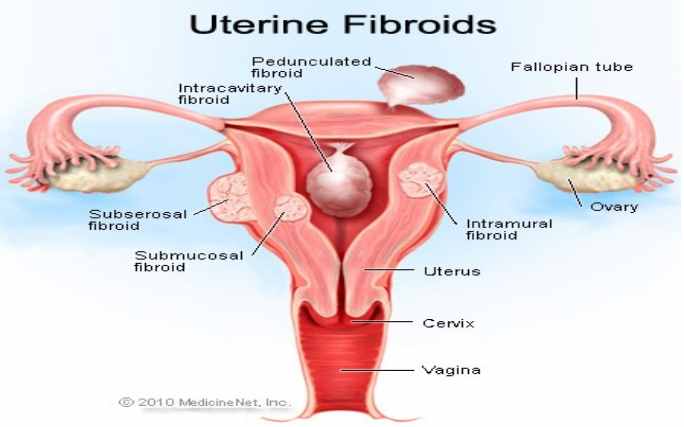 Uterine fibroids are the commonest problems that affect 25-50% of women of reproductive age.  They are benign (non-cancerous) tumours that grow in or around the uterus.  They vary in size, number and location. They can develop as solitary tumour or in clusters and can be as small as a pea or as massive as a watermelon.  Some of them come with no symptoms at all; therefore the sufferer may not be aware that she has fibroids. For others, the symptoms can be so severe that they can pose a health or fertility risk.

There are three types of uterine fibroids and these are named according to their locations in or around the uterus. These are:

Intramural Fibroids:   These grow within the muscular wall of the uterus.  They are the commonest type of fibroids.

Subserosal Fibroids:  These develop on the outer wall of the uterus. They can grow outward into massive sizes and extend to other organs of the body. They can actually distort the uterine cavity.

Submucosal Fibroids:  These develop just below the lining of the uterine cavity and grow into the uterus.

Pedunculated Fibroids:  These grow on the outside of the uterus and are only attached to the uterus by a narrow stalk. They can also grow towards the uterus.

The causes of fibroids aren’t yet known. Though female hormones like oestrogen and progesterone speed up the growth, they aren’t responsible for the development.  During menopause, however, fibroids begin to shrink or decrease in size due to the fall in hormones levels.

Ordinarily, the presence of fibroids won’t pose a threat to a woman’s fertility or capability to conceive.  However, fibroids which are located within and distort the uterine cavity have a great impact on reproductive functions. These are the Submucosal Fibroids. They can actually cause fertility problems and miscarriages by:

1.      Pressing on the fallopian tubes. Consequently, this can cause a blockage, thereby preventing fertilization from taking place.

3.   Causing the uterus to be inflamed, consequently, creating an unconducive environment for an embryo.

Uterine fibroids don’t always require treatment. Treatment is only necessary where symptoms are severe or where there are intentions of getting pregnant. Such treatment includes:

•        Hormone treatment to reduce the levels of female hormones in the body, thereby shrinking the fibroids.

•        Surgery to remove the fibroids. For submucosal fibroids, since these prevent implantation removing them surgically may greatly improve one’s chance of getting pregnant.

The different types of surgery available to get rid of fibroids are:  Hysteroscopy, Uterine Artery Embolization, Myomectomy and Hysterectomy. While the first three are good options if a woman plans to have children, the last isn’t. This is because a hysterectomy is a procedure where the uterus is completely removed. Fortunately, doctors have presently worked out various ways of dealing with fibroids that wouldn’t tamper with the fertility of the patient.