CHILDREN WHO WATCH TOO MUCH TV MAY HAVE ‘DAMAGED BRAIN STRUCTURES’ 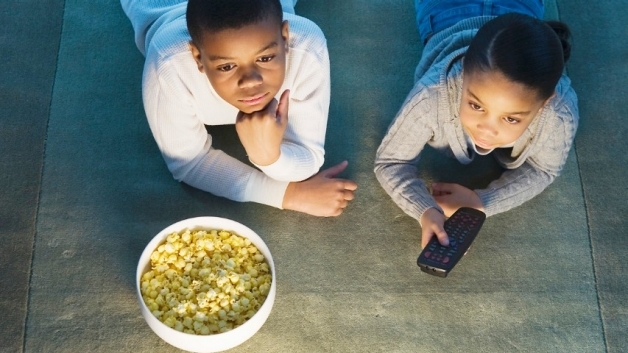 This is a note of warning to Nigerian parents and parents in general. You may not be doing your child any good by allowing him/her to watch too much TV. You might actually be doing a lot of damage to their brain according to a new study.

Watching too much television can change the structure of a child’s brain in a damaging way, according to a new study.

Researchers found that the more time a child spent viewing TV, the more profound the brain alterations appeared to be.

The Japanese study looked at 276 children aged between five and 18, who watched between zero and four hours TV per day, with the average being about two hours.

MRI brain scans showed children who spent the most hours in front of the box had greater amounts of grey matter in regions around the frontopolar cortex – the area at the front of the frontal lobe.

But this increased volume was a negative thing as it was linked with lower verbal intelligence, said the authors, from Tohoku University in the city of Sendai.

They suggested grey matter could be compared to body weight and said these brain areas need to be pruned during childhood in order to operate efficiently.
‘These areas show developmental cortical thinning during development, and children with superior IQs show the most vigorous cortical thinning in this area,’ the team wrote.

They highlighted the fact that unlike learning a musical instrument, for example, programmes we watch on TV ‘do not necessarily advance to a higher level, speed up or vary’.

‘When this type of increase in level of experience does not occur with increasing experience, there is less of an effect on cognitive functioning,’ they wrote.

The authors said the impact of watching TV on the ‘structural development’ of the brain has never before been investigated.

‘In conclusion, TV viewing is directly or indirectly associated with the neurocognitive development of children,’ they wrote.

‘At least some of the observed associations are not beneficial and guardians of children should consider these effects when children view TV for long periods of time.’

The children in the study were an almost even split between girls and boys.

The findings, published in the journal Cerebral Cortex, highlighted an association between TV viewing and changes in the brain but do not prove that TV definitely caused the changes.

Scientists also cannot be sure whether missing out on activities such as reading, playing sports or interacting with friends and family as a result of watching TV could be behind the findings, rather than TV being directly to blame.

But they did say that the frontopolar cortex area of the brain has previously been associated with ‘intellectual abilities’.