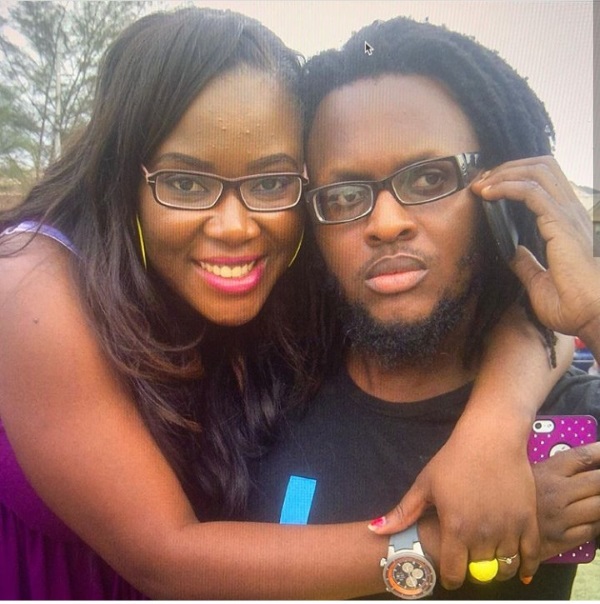 Clarence Peters’ girlfriend of 14 years, Jennifer Alegieuno has called out those who left negative comments online as she defended her boyfriend after he was called in for questioning over the death of video vixen Picture Kodak who died at his house.

Kodak died last Wednesday, April 29, after she was allegedly electrocuted while charging her phone at Clarence’s house in Omole Estate.

Following her death, Bala Elkana, spokesperson of the state police command in an exclusive chat with LIB, confirmed that Clarence has been detained and is being questioned as the police is investigating for murder (read here).

Clarence’s detention got people talking and his girlfriend stepped in to defend him.

Sharing photos of her and Clarence, she wrote: “Giving people a reason to form negative opinions and I see people who I thought had sense making snide remarks? You want to know how we landed here? It was all your negative commenting. So kudos to the blogs, and you especially, the ignorant lot.”

She went on to explain how the investigation has been going and why Clarence was roped in. She said Clarence was not at the scene of the incident when Kodak died.

She also blamed “corruption and laxity in the police force” for what’s going on, then claimed a female police officer attempted to get involved in “foul play”, until Clarence’s father, Sir Shina Peters stepped in.

It is SICKENING the corruption and laxity in the NIGERIAN POLICE FORCE!
But First, lemme start with you the ones who follow blogs and comment without thinking. That someone earns a living from breaking homes and destroying people’s reputation is something that should naturally be worrisome to you but NO, it refreshes you.
So, as Clarence’s 14yrs long girlfriend, Lemme state AUTHORITATIVELY that CLARENCE PETERS was invited to police command, YABA and he went there willingly. He was NOT arrested, neither was he CHARGED WITH MURDER as stated by the press statement from the police command through their spokesperson BALA ELKANA!
Just because we chose to keep quiet until the autopsy result comes out before addressing the press and of course the police report to exonerate him was signed and collected.
On friday 2nd of May, 2020 an investigative team led by IPO, MR. POPOOLA, after the on-scene investigation was done, the body visited at the morgue, came to a conclusion they had no case with CLARENCE PETERS(who was not on the scene of incident) SEGUN the business manager, the 4dancers and two other members of staff of CAPITAL DREAMS PICTURES, (all referred to as witnesses), that it was a NATURAL ACCIDENT. He wrote his report to that effect. Events took a different turn when The DCP- YETUNDE LONGE, came in and asked that the report be torn, he wrote a second one that she tore again. By the third report, then came in MR. OYE and his father Sir Shina Peters and she couldn’t continue with her foul play. She agreed they had NO CASE with him and the rest of the witnesses. “So why are u still holding him..” everyone asked, she said she was waiting for the autopsy result so she can attach it. When she saw she had been caught, she sent them to put out a press statement that he was charged for murder. So thinking Nigerians, can someone be “CHARGED” without an autopsy conducted?
Backtrack a bit, after LD passed on, it took more than 24hrs to seek the consent from her family to conduct that autopsy. By the time the consent was gotten, due to the COVID-19 caused NIGERIAN COURTS CLOSURE, the autopsy was to start on monday being tomorrow. Cont’d below.

Read the rest of her statement below.