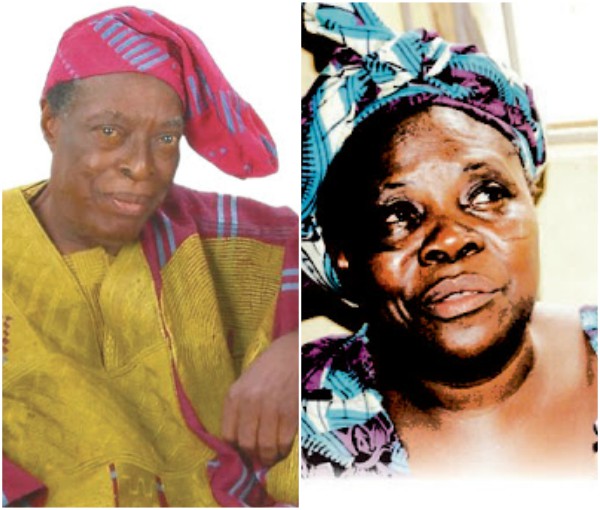 Reminiscing all they shared together while he was still alive, wife of late Nigerian poet and actor, Adebayo Faleti, Olubunmi Abosede,revealed that she shared a rare mutual connection with her husband.

According to The Nation, though they started off from different sides of the divide in terms of exposure, education and age, in 1981, however they embarked on a romantic and marital sojourn that blossomed to the delight of the couple, their close friends and family.

One thing, Olori (as late Faleti usually called Abosede) would never forget in a hurry was their closeness. Describing it as borderless, the widow recalled painfully that they were so close to the extent that they shared the same pant. This is aside their usual practice of sharing the same clothes around the house, particularly overnight, and before getting dressed for the day’s activities.

“We were so close to the extent that I wore his pants and underwear. Up until his death, if you come to our house very early in the morning, maybe around 6am, I wear his clothes all around the house before getting dressed or set for the day’s activities. Baba was always willing to give me his Buba to wear. We were so close,” she said tearfully.

“We were very close during his lifetime. From the time my parents sent me out after I took in (got pregnant) for him, he accepted me and my child and promised me that no hurt will come to me. He fulfilled his promises.

Being his ‘only wife’

When asked the numbers of wives her beloved had in his lifetime, Abosede would not put a figure to it but she would not also deny the obvious; she insisted that she was the only one residing in Faleti’s house and she stayed married to him until his last breath.

Abosede took solace in her late husband’s manner of responding to the question anytime he was asked, especially by journalists.

“If you had visited Baba in his lifetime or even read many newspaper interviews of Baba on the question of the number of his wives, his response had always been that he has only one wife. Most times, Baba would even ask you, how many wives you ever saw in his house or under his roof. And he would be the one to answer that it is only one wife he had.

“So, I do not know the number of wives Baba had but he had already said it with his own mouth, how many wives he had. All I know is that, I have been the only one living with him and under his roof since the first day we got married and till he died,” she said.

The ‘Olori’ and her beau
Abosede said she did not only love her late husband, she also knew him so well because they were best of friends. She recalled that her social affiliations did not favour her to win the love of a renowned and established person like Faleti but that the way her late husband accepted and took care of her when she was rejected by her parents for getting impregnated by him endeared her to him. His penchant for fulfilling all his promises to her was also a very good reason she remained extremely loyal and devoted to him.

Despite her loss, a glimmer of smile surfaced on her face when asked about her late husband’s favourite meal. “He liked amala and gbegiri soup. He could eat it in the morning, afternoon and night. He liked bean cake, fried with palm oil and he also liked meat, fried meat particularly. That is always his favourite anytime he was in his study doing any writing task,” she said.

The story of how the duo met and got married was an unpalatable aspect of their journey. It was an unexpected and unimaginable thing for, Abosede, a Form Five student of Christ High School, Oleyo, Challenge-Orita, Ibadan to be wooed by an elderly and established man like late Faleti.

Thus Abosede’s initial rejection of her paramour wasn’t so astonishing, Her parents kicked against their love and marriage. Despite their rejection, Abosede and Faleti eventually sealed their union at Mapo (being Oyo state capital at the time) where they eventually got married.

According to her, she had three ‘good’ grounds to turn down the proposal of late Faleti. First was her intention to further her education beyond secondary level, which incidentally was also the dream of her parents. Second, her strict Christian parents would not even allow anyone at the time to distract her from her studies. And third, her parents, who are committed members and leaders at Christ Apostolic Church would never allow their daughter get married as a second wife.

Narrating how they met, Abosede recalled that her first encounter with the man who later ended up as her husband and father of all her children, was at the annual inter-house sports competition of her school, where Alagba Faleti was invited as a guest.

She reasoned that, it was probably her plump but sportive physique that caught her late husband’s attention but she later earned Faleti’s audience after the event. He seized the opportunity to commend her sporting abilities. She later got another invitation from him to visit to his workplace.

Another factor that brought them close was the establishment of the O-Y-O Fans Club, where students from various secondary school across the region were invited for on-air performances in songs, dances and drama at Broadcasting Corporation of Oyo State (BCOS).

Her school was the first to be invited and subsequent visits provided her more opportunities to see Faleti. Her participation in the broadcasting activities offered her innumerable chances to meet with Faleti. Those were the only opportunities she had to meet him as she was hardly allowed to go out. Her parents watched her with an eagle eye.

A series of unpalatable episodes

Abosede revealed that she would never forget certain individuals for the roles they played in her marital journey with her deceased husband. They are Prince Bayo Sanda, Prince Adenle and Prof Olatunde Olatunji; Sanda and Olatunji later visited her to convey love messages from Faleti. They reportedly conveyed his genuine intentions for her.

Although she said she refused to give them a positive response, she agreed to rejoin her school troupe anytime they were invited for performance by O-Y-O Fans Club Choir and that afforded Faleti opportunity to see and woo her.

According to her, months later, Faleti challenged her to inform her parents of his intentions. Even though she already knew what to expect, she did his bidding. She was so sure her mother wouldn’t even listen to such a subject at the time because she was very strict unlike her father who had a softer disposition.

“I knew I could talk freely with my father than my mother because she was stricter and harsher than my father. My father was soft-minded but not my mother. Then, one day I told my father if he knew one man named Adebayo Faleti, and that he had proposed to marry me. My father said he wanted me to go to school and get better education,” she said.

After her secondary education, Abosede appealed to Faleti, who she was already developing a soft spot for, to let her be in order to face her education, according to her parents’ wish. She remembered how Faleti pulled her aside and assured her that he would stand by her and encourage her to attain any level of education she desired.

She said that his words were always reassuring; she was encouraged by the fact that he had no wife at home or anywhere. Faleti convinced Abosede that there was no woman lurking in a corner to give her problems if she married him.

He assured her that he would do everything necessary to protect her from any antagonism if she agreed. To show his determination, she said, Faleti engaged the services of a private tutor for her, which helped her pass her exams in flying colours before encouraging her to enroll at Teachers Training College, Iyana Offa.

She suspected that Faleti was either advised, warned or unsure of what might happen if he allowed her depart from his sight especially the likelihood that she might be snatched by another man.

One thing led to another and she was impregnated by Faleti.. That was to begin another unpalatable episode in her life.

“When I took in for him, I never knew how I was going to tell my parents at home but my mother observed me well and then challenged me asking if I was pregnant. Reluctantly, I said ‘Yes.’

“My parents chased me out at midnight, around 1 am. They chased me out of the house naked. My father ran after me but I ran as fast as I could. I took refuge in the house of one of my father’s church members, Mrs. Joke Ishola. I had taken a rag from somewhere along the road to cover my nakedness. When I got to her house around 2am, she was shocked to see me but she accommodated and clothed me,” she said.