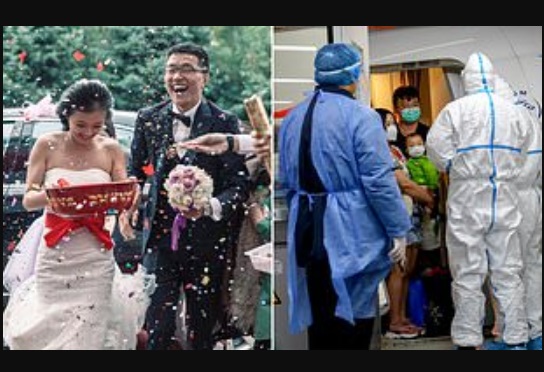 The Chinese Government has banned couples from getting married on lucky date, tomorrow.

February 2 is considered a lucky date for wedding ceremonies this year because the sequence of numbers ‘02022020’ is a palindrome, meaning it reads the same backwards as forwards.

But following the coronavirus outbreak which has claimed the lives of 259 people with the total number of cases at 11,946 worldwide, the wedding ceremonies this year have been cancelled.

‘Where marriage registrations have been announced or promised for February 2 this year, you are advised to cancel it and explain the situation to others,’ a civil affairs ministry statement said.

The ministry said it would temporarily halt marriage counselling services and asked the public not to hold wedding banquets.

They also advised that funerals should be held in a ‘simple and expeditious manner to avoid gatherings of people’ and the bodies of any victims of the coronavirus should be cremated as soon as possible.