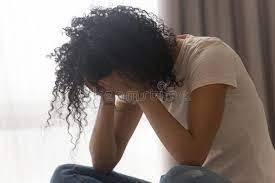 My husband and I got married about seven years ago. Our marriage started on a very sour note. His mother was involved in an accident on the way home from the wedding but she didn’t survive it. We didn’t consummate the marriage until a few days later. Going forward we would fight often. We would disagree on almost everything and I attributed it to the loss of his mum. I thought he was simply grieving and things would get better with time. They didn’t.

He wasn’t paying the bills and he went totally quiet. He wouldn’t speak to me at all. I tried to get other parties to talk to him and help out. I tried his older brother and his wife, friends who have been married longer than us, pastors, and even marriage counselors. Nothing yielded results or brought any changes.

Related content: My husband seems to be avoiding me

We got a baby in 2017. I thought this would have a positive impact on the marriage and things would finally work. I was wrong again. Things actually got worse. I remember he went quiet for a good six months the year after. Soon after, he started cheating. No, I wasn’t imagining things or thinking the worst of my husband. I actually found receipts in his pockets, lipstick on his shirts, communication between him and the women, and pictures. The evidence was all over. He didn’t even try to hide it. I tried reaching out to his brother and sister-in-law again but nothing was forthcoming. So much had happened and I felt emotionally and psychologically abused. I decided to leave.

The day I finally got the courage to leave he beat me up. I was afraid to go but it didn’t make a difference. He left instead and stopped all communication. He didn’t come home, didn’t call or text. I let him be and went on with my life. Earlier this year I thought to reach out, maybe hoping to give us another chance. He responded and we got talking. We even agreed to mend fences and get back together. That was short-lived because I found out he was seeing someone. They had even gotten a child together about two months before. So all those conversations were just lies! I’m really done with this relationship and I want a proper divorce. I need to pick up the pieces with my daughter and look ahead.

I’ve brought it up but he’s harassing me for it. His family isn’t happy about it and people are generally dissuading me from getting a divorce. Why is he allowed to move on and have another family but I’m not? All I hear is condemnation for my decision. Don’t I have grounds for divorce? Can’t I also be with someone else? Even my daughter noticed and she made a comment the other day. She said we should go ahead and look for another father because the one she has doesn’t come home, call or even visit. She’s a little over four years now and she noticed. Isn’t it time?