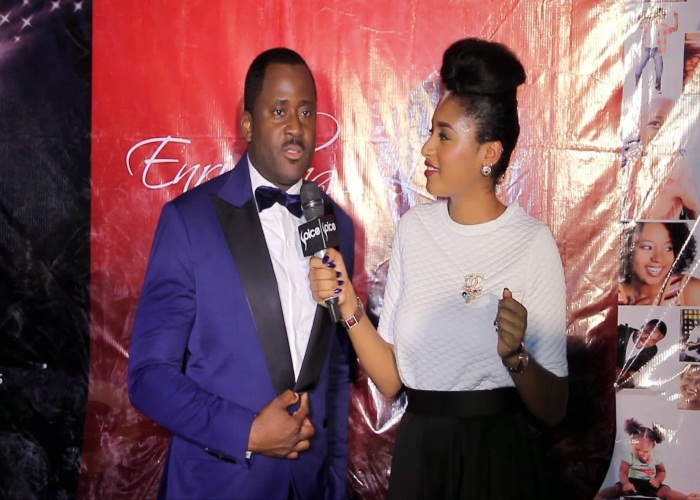 Just a week ago, the leadership of Nigeria’s booming movie industry Nollywood, a body reputed to be the third largest entertainment platform in the world went into a crisis after its President, newly married Mrs. Ibinabo Uche Egbuka was sacked by a High Court Judge, Justice James Tsoho in a suit filed by an actor, St. Maradona Mikevine  who  was the national treasurer in the election that produced another popular actor, Emeka Ike as AGN President.

Reacting to all the drama star actor Desmond Elliot, who’s also warming up as the APC candidate in the forthcoming Lagos House of Assembly elections for Surulere Constituency 2, frowned at the plots to remove the hard working lady who he believes has done so much to lift up the image of Nollywood.

Ironically, the handsome actor, Desmond Elliot is of the APC fold while the embattled Actors’ Guild of Nigeria president Ibinabo has been working closely and assiduously with other top actors for the incumbent president’s re-election but that notwithstanding, Desmond is of the opinion that, there’s no need changing the winning team for just a flimsy selfish reason.

“Firstly, we appreciate the laws of this country and believe so much in this nation, but however, we have seen the marked changes and ray of hopes Ibinabo has brought into the guild, it’s just a trying time, I see her triumphing at the end which goes out to show that, whatever the case, good deeds shall always overrule evil in any pursuit of greatness. Let me reiterate that relevance is not by going to the law court but by your little contribution to the growth of this industry, time and history will not forgive those who have benefited in terms of popularity and financial gains and have done nothing other than join heads to cause chaos in our industry, we know who’s who, we know those who meant well for this industry and we must not allow them to put spanner in the works. But God is with Ibinabo in this fight, Nigeria is with her. Desmond is with you and together we shall free this guild and make it a stronger union for the future generations of the unborn entertainers” he concluded.