Disagreement with husband about breastfeeding and co- sleeping….am I being unreasonable? 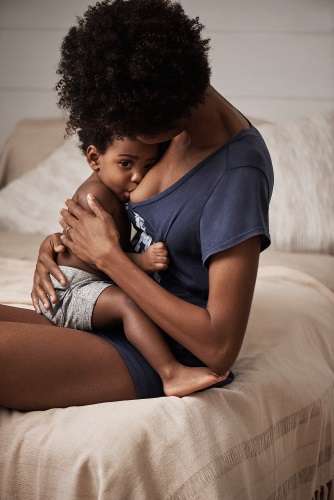 I’ve got a nearly two year old son that is still breastfeeding, during the day as well as night. We co sleep in the downstairs bedroom while my hubby sleeps in the visitor bedroom upstairs. This arrangement started on the second night home with my baby after my c-section, when he said he “couldn’t copoe with it any longer” and went upstairs to sleep. So, I am definitely the main caretaker, he has never ever gotten up with the baby when unwell or done any nighttime parenting duties whatsoever.

Now, I’m the stay home parent and he works in the healthcare field therefore I just accepted the reality that I was going to do the most of almost everything. I actually don’t mind. I am extremely attached to my son and he is attached to me and I want things to stay that way. Prior to the Corona business, I had been focusing on reducing daytime breastfeeding, as my strategy was to cut that way down yet still keep breastfeeding to sleep and sometimes at night. At this stage he breastfeed to sleep and rarely does he wake up at night to breastfeed unless he’s unwell or something is wrong. Well with my concern with food scarcity and things in general, I practically went back to breastfeeding when needed. And it’s impacted my son’s appetite.

I mean I can tell. He simply wants to breastfeed throughout the day and won’t eat very much at mealtimes. Today my hubby said he think it is time to wean him. And I said guess what, you are probably right. I told him that it was probably going to be challenging for me, because I do enjoy the closeness that comes from breastfeeding. He said he knew that, and that he knew we might probably “have issues apart from breastfeeding in the future.” I asked him what he meant by that. He said “you’re breastfeeding him far too long, and boys don’t need to be breastfed too much or it will cripple them later on.” I also need to insert here that he has two son’s from a past marriage that were not breastfed and his partner didn’t utilize attachment parenting.

They were put in daycare from day one. He doesn’t have any experience with the way I have chosen to parent my son. Anyway, this is the first I’ve ever heard him saying that I am breastfeeding our son too much or that boys need not be breastfed too much and it really upset me. I guess I just wanted to vent into the void. I’m not sure what to do, other than keep doing what I’m doing and forget about what he said.
Can any parent relate with me. Am i doing something wrong here?