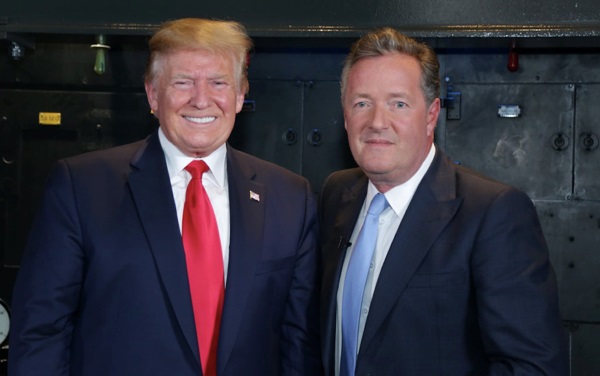 US President, Donald Trump, has unfollowed TV host and Daily Mail Columnist, Piers Morgan, after the Good Morning Britain programme host wrote a Daily Mail article telling Trump to ‘shut the f**k up’ while slamming his approach to the Coronavirus pandemic as ‘batsh*t crazy’.

Piers’ critical article against Trump came after the president in a Thursday press conference  suggested tackling coronavirus with the use of ‘powerful’ UV light or even injecting patients with disinfectant, to which the US leader dismissed as a sarcastic statement on Friday after receiving lots of criticism from the medical community.

Starting his Daily Mail column by telling Mr Trump to ‘shut the f*** up’, Piers blasted Trump for using his position to air his ‘batsh*t crazy theories about how to beat the virus’.

‘The leader of the free world has turned the daily White House task force briefing into a rambling two-hour self-promoting rally.’ Piers wrote.

‘He’s devoted large chunks of them to trashing the media, attacking political opponents, telling us how great he is, and re-writing history as he tries to defend all the mistakes he’s made since the virus first erupted.

‘And he’s done all this while 50,000 Americans have died from COVID-19, the worst death toll in the world, and nearly a million cases have now been reported across the country.

‘Last night he stooped to a shameful new low by suggesting people suffering from COVID-19 should be injected with toxic disinfectant.

‘It’s hard to imagine a more stupid thing for a President to say than publicly float a completely unsubstantiated “idea” like that which will inevitably make some Americans believe having bleach inside them will cure the virus.’

And on Saturday, Piers Morgan then took to Twitter to announce that Trump has unfollowed him on Twitter.

He wrote: ‘UPDATE: President ? @realDonaldTrump ?has unfollowed me on Twitter, hours after I wrote this ?@DailyMail ?column’.

Piers has known Trump for over ten years and Piers won Trump’s hit TV Show ‘Celebrity Apprentice’ in 2008. Ever since then Trump has granted him special interviews and they have both praised each other publicly.