Emmanuel Adebayor’s Family Crisis Gets Messier; Brother Tells his Own Side of the Story 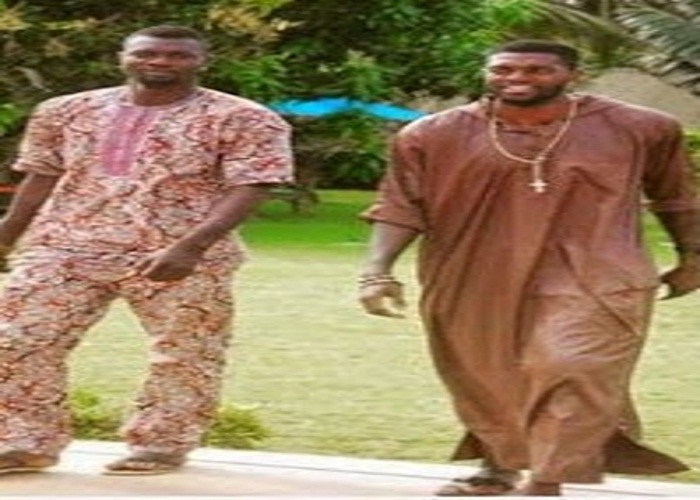 Tottenham Hotspur’s striker, Emmanuel Seyi Adebayor has been in the news for sometime now after his recent outburst on Facebook against his mother and siblings. To get a clearer picture, SunNews caught up with star’s younger brother, Rotimi Adebayor in Lome, Togo to hear the family’s side of the story. When they met with Hajia Adebayor, the mother of Togo’s most famous football player, she revealed that she is under instruction not to talk about the issue.

Excerpts from Rotimi’s interview with SunNews:

It’s really tough now. The situation is no longer the way it used to be. I hardly go out because I have my own business to mind. As you can see that I run a bar very close to where I live.

Ah! the Facebook rants. Everyone knows what happened because he decided to make a mountain out of a molehill. ‘Oro ase ni gbogbo e’ (They are words spoken out of context)

No response from him yet. I apologised be­cause he is my elder brother and we have re­solved so settle issues amicably. My elder sister advised us to bury the hatchet.

Yes, we met and he said, ‘Omo Iya ba wo ni’ (My brother how are you). However, I didn’t play with them because I wasn’t in the mood.

No, I was there till he left but he didn’t greet me as he drove off.

I agree, yes he is

Hmh! I can’t explain what happened

It was at the FC Metz football Academy in France and I was 14 years old then. My mates were already at the training pitch on that day, so I was running to meet up with them when I found the mobile phone on the aisle within the training complex.

That was the mistake I made and I regretted it thereafter. Actually I kept it on the table in my room and my roommate wanted to know who owns the phone because he didn’t have any then. I told him how I found it, and then he de­manded to make use of it.

Kelvin. He is an American and the owner of the phone is from Asia but from an ‘Arab coun­try’ The ‘Arab’ boy saw the phone with Kelvin and immediately reported the case to the man­agement of the academy. They informed my brother about it. He called me to hear my side of the story but I was later informed to pack my things out of the academy.

It’s really disheartening that such a thing is happening to us right now. My wife was mocked at the market after the first post Seyi (Emmanuel Adebayor) published on Facebook. She called me to inform me about what people are saying. Immediately I logged in and read the post. I felt very sad.

I called him and asked him why he had to do that but he got angry with me. We had a heated argument on phone, which led to unprintable words being used freely. As a matter of fact, we quarrelled over the phone for almost two hours.

Yes I did that because I felt very sad and em­barrassed. Then he made a decision to inflict more insinuations against me.

He did in exactly thirty minutes and before I could log into my F acebook account, my friends called me to quickly go and read the second part of my ‘film’.

The post he released, the second rant against the family. It’s sad because our mother, who poured her blood on our heads, received the greatest insult of her life. A woman who suf­fered so that we can live a good life is now re­ceiving such a disgraceful accusation.

Yes and all those nonsense things he wrote against me and our elder sister in Ghana. Well, we have decided to leave it all in God’s hand. Our mother is a not a witch neither does she practice witchcraft. How can your mother wish you bad luck? I play football as well and I know that players do suffer loss of form. He shouldn’t put the blame on anyone.

He has over 50 houses in Lome and cur­rently lives in Didjole. He also has some others in Ghana. He has taken custody of everything.

People can say whatever they like. He is my elder brother and we know we have the same mother. I am less bothered about the rumour go­ing round the city.

A lot of people do not understand the begin­ning of this issue but I put the blame on myself because of the boy I wanted to help. His name is Masaudu. He’s from the Republic of Benin. I brought him from the rough side of the bor­der so that he can help us with some domestic work. He grew up with the family and betrayed us. Masaudu cooked up stories for Seyi to be­lieve and he succeeded in destroying our fam­ily. He was the one that was sent to inform our mother to pack out of the house. But I believe that God’s judgment will prevail. I will continue to appeal to him (Emmanuel Adebayor) to be considerate in his judgment. I want him to for­give and forget in the memory of our late father and forget what people are telling him. We have our children and we shouldn’t let this issue de­generate into generational fight.

I am not far away from God.

It’s really sad to see her return to a business she left a long time ago. No one would be hap­py to see her mum in this sort of situation. Well, I leave it all in God’s hand. He will judge every situation. ‘Ayanmo ni gbogbo nkan’ (Destiny will always prevail).