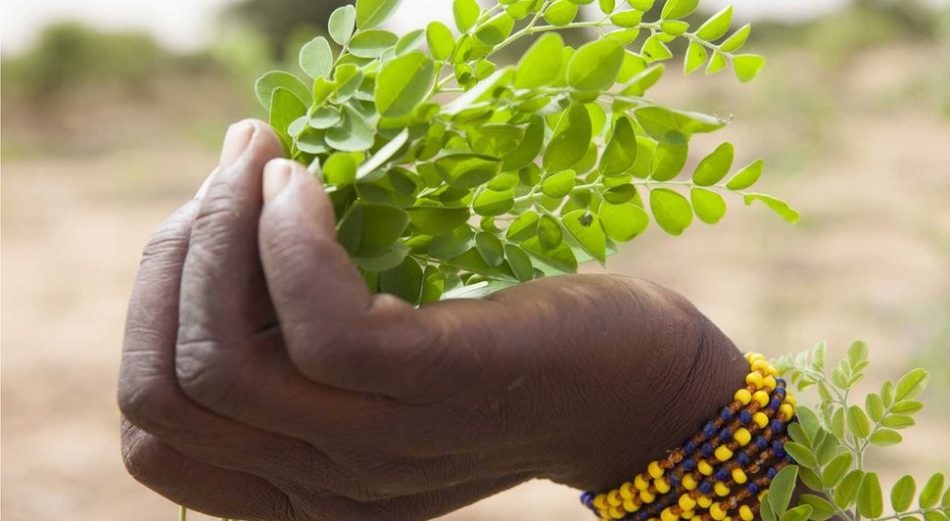 Moringa for Malnutrition .Malnutrition comes in different forms like anemia, beriberi, kwashiorkor or scurvy and it is often responsible for the high rate of infant deaths in many West African countries including Nigeria. In previous years there have been different approaches to address the issue of malnutrition but they have all been met with a common significant drawback: the intended solutions relied heavily on imported products and external personnel, both of which are near impossible to sustain in the long run. Moringa for Malnutrition .

Besides, all those seemingly exotic foods that are imported into the country as well as the non-local nutritional supplements are not always properly incorporated into the diets of many families and as of 2014, about 11% of the population across the world were found to be severely malnourished.

Poor nutrition is one of the major factors that influence children’s vulnerability to diseases and infections. For example, in southern Senegal, about 1 in every 10 babies die from malaria, diarrhea or parasites before they get to their fifth birthday.

But all hope is not lost as there may now be a local, sustainable solution to the issue of malnutrition and the diseases associated with it. A solution that is within reach of everyone in the country and which practically everyone is familiar with: the Moringa plant!

The moringa plant first originated from India and was brought to Africa by people who used it not only for medicinal purposes but as a source of food. The tree is known to love sunshine and can withstand just about any condition of drought. It grows very fast from seedling to tree and can grow as tall as 12 feet within the first 12 months of being planted. Not to mention, even after severe pruning it can still regenerate itself such that you can obtain about 2 harvests of seed pods in a year. In fact, a fully grown moringa tree can produce at least 1000 seed pods each year.Moringa for Malnutrition .

Interestingly, the leaves of the moringa plant tend to appear close to the end of the dry season when most other green leafy vegetables are available which makes it a valuable alternative during that season.Moringa for Malnutrition .

As you are about to find out, the moringa plant has a wider archive of nutrients that most other plants as well as two major game-changers that are essential in the world of nutrition. That is:

Now, what makes moringa so special that it is considered for ending malnutrition? The entire plant is useful.

The leaves and the immature green seed pods can be consumed the way you’d eat other types of vegetables and they are low in carbs and fats but are rich in calcium, proteins, iron, minerals, vitamins B and A and when eaten raw, vitamin C. This makes the leaves supremely ideal as a nutritional supplement.

But that’s not all.

Did you know that 8 ounces of the fresh leaves contain enough of the daily requirement of vitamin A for almost 10 people? Yeah, it’s true.

In fact, if you add 2 raw leaves of the moringa plant to a child’s food on a daily basis or add about 3 teaspoons of the powder obtained from the dried leaves into meals, it provides an outstanding protection against calcium, protein and vitamin deficiencies in kids that are at high risk of malnutrition or in malnutrition prone areas.

In the cases of nursing mothers and their babies, the pods of the moringa plant is a significant source of potassium, fiber, iron, copper, vitamin C, all the essential amino acids and choline and it has been found that when these nursing mothers add moringa leaves to their diet they tend to produce more milk.

On the other hand for women of childbearing age, the increased consumption of the pods and the leaves of the moringa plant completely eradicates malnutrition especially because apart from its rich nutritional content, it is a valuable alternative during the dry seasons when few other leafy greens are in season while children that are severely malnourished and who had the leaves added to their diet gained healthy weight. The leaves are often added to porridges to increase their nutritional content.

The flowers can even by fried and have been said to have a texture and taste similar to mushrooms. They can also be crushed or used whole for making teas that are effective for the treatment of flu and colds.

The young green seeds obtained from the immature pods can be cooked the way green peas are cooked, roasted like peanuts or cooked as a substitute for okro in soups. As the pods mature and turn brown, the brown seeds can be crushed to produce high-grade oil similar to olive oil which can be used for cooking and treating skin infections such as scabies. If the moringa oil is coated on the top of a water tank, it helps to kill the larvae of mosquitoes, thereby reducing the threat of malaria and other similar insect-borne diseases.

There are hardly any other plants with qualities like these and that is why it has rightfully earned the name “The Miracle Tree.”

Therefore, since this moringa is so inexpensive and easy to grow and its uses are so versatile and self-sustaining making it essential for combating various aspects of malnutrition, you can see that it’s not an understatement to state that moringa can be used as the building block of fighting malnutrition everywhere.

Once moringa’s multiple uses have been exploited in each local setting, it becomes a very efficient way of combating malnutrition.