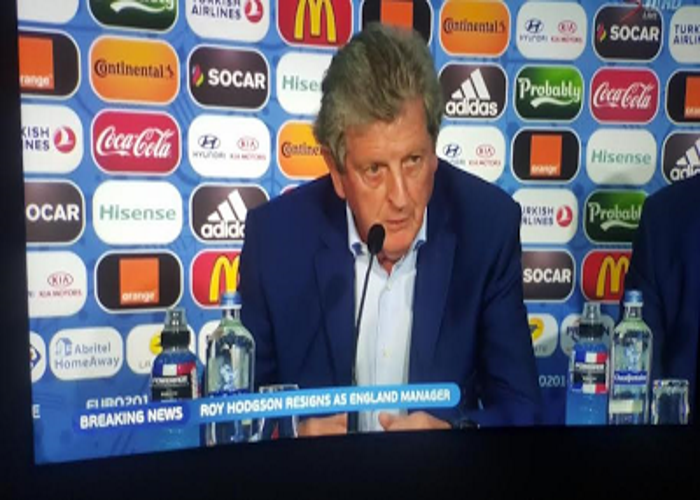 5 years ago / 582 Views
Roy Hodgson has resigned as England manager after his team were beaten 2-1 by Iceland to seal their exit from Euro 2016. Assistant managers Gary Neville and Ray Lewington have also resigned.  Announcing his resignation immediately after the final whistle in the post-match press conference yesterday’s evening, 68 year old Hodgson said;

“My contract was always up after the Euros so now is the time for someone else to oversee the progress of this young, hungry, extremely talented group of players.

‘They have been fabulous and they have done everything that was asked of them. When I arrived I was told players didn’t turn up to play for their country or pulled out at the last minute.
‘I have not seen any of that.These players love to play and their commitment has been exemplary.
‘My staff have asked me to speak on their behalf. They came with me as part of my coaching team and they will leave with me.
‘Finally I would like to thank all my support staff, the players, the FA and of course the fans. It has been a fabulous journey these past four years. We tried.
‘I woud like to thank you the media for the support you have given me. I am sorry it has had to end in this way with another exit but these things happen, and all I can do is wish everybody the very best and hope that you will still see an England team in the future in a major finals with the success that we have been unable to achieve.’