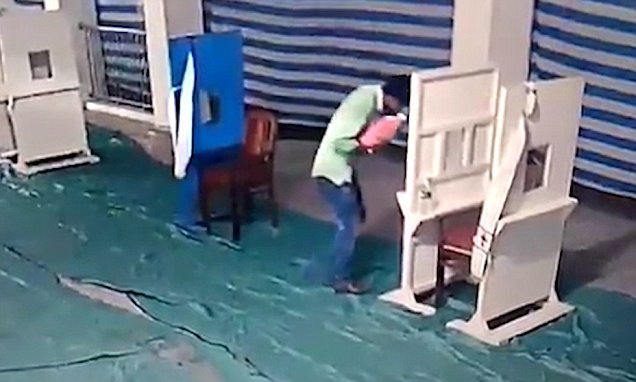 A dad has been caught on camera kissing his three-day-old baby on the head before abandoning it in a church.

Bitto Davis, 32, from Kerala, India, and his 28-year-old wife, Pravitha, were later arrested after the chilling footage was aired on local TV.

They then reviewed the CCTV, which shows the dad strolling in before carefully placing his child on the ground.

He then walks away but seemingly cannot help glancing back at the child one last time.

When police detained the man and his wife, they reportedly claimed they had abandoned their own child because people laughed at them for having too many kids.

It has been reported friends and family had mocked Pravitha for becoming pregnant again.

A police officer told the Indian Express: “They already have three sons, aged eight, six and four and this was their fourth child.

“Bitto spoke of getting mocked by his friends for having four children in such quick succession and I think that is why he was disturbed. His friends would often apparently comment on the size of his wife’s belly and keep prodding whether she’s pregnant.

“After his wife’s delivery in Thrissur, they took a train to Kochi and arrived at the church to leave the baby.”

The couple was charged with child abandonment and cruelty charges.