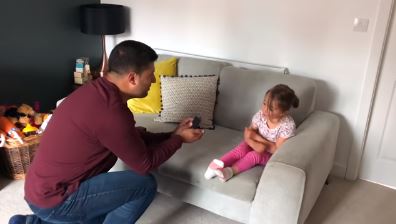 A video showing a heartwarming moment a thoughtful man bought a ring, went on his knee and proposed to his 4-year-old daughter shortly after he married her mother, has surfaced online.

The man identified as Mark Thomas, got married in April 2018, to the love of his life, but their 4-year-old daughter, Evelyn told everyone it was “her big day” and even asked for her own ring. So the thoughtful man decided to go all out and propose to the little girl too.

In the adorable video, Thomas is seen on one knee and with an open ring box, asking little Evelyn, “Will you marry me.”

The girl happily replied, “Yes.” and picked up the ring to put on her finger.

The man collected the ring for her to help her put it on but says first, “Once this ring goes on, we are now a family.”

The girl was so excited and kissed the ring multiple times then leaned into her father, who then carried her.

Watch the beautiful video below: