FAYOSE- ‘APC Brought Buhari In Like A Thief In The Night’ 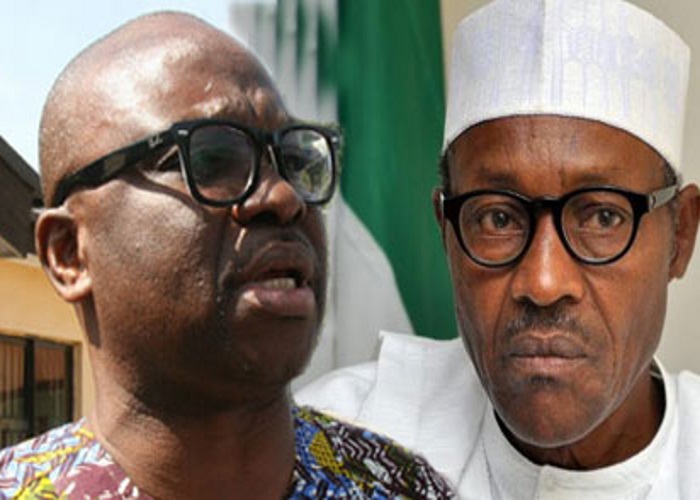 Ekiti State Governor, Mr Ayodele Fayose isn’t done with the All Progresives Congress just yet as he continues to speak up against things he feels aren’t supposed to be with the party. He explained that the APC rally to be held in Lagos today is aimed at causing confusion and pandemonium in the commercial capital.

He further noted that the march could be another device to take the minds of the public away from the lies they told about the health status of the party’s presidential candidate, Major General Mohammadu Buhari (rtd).
The governor also said that he had been vindicated by Buhari, having admitted that he actually travelled to the United Kingdom to rest and that he visited his doctors.
According to a statement issued in Ado Ekiti yesterday by the governor’s Special Assistant on Public Communications and New Media, Lere Olayinka said, walking the streets of Lagos by the APC would not remove the fact that the party is a congregation of liars and deceitful people, who can never be trusted with the resources of Nigeria and its people.”

Fayose who insisted that Buhari was not healthy enough to govern Nigeria said; “A man who campaigned for four weeks, speaking for less than one hour in all the rallies put together and needed to rest for 15 days should just stay at home and be playing with his grandchildren rather than struggling to take up a job that he does not have the required mental and physical strength to do.”
He said; “They brought in Buhari like a thief in the night and now they want to put Lagosians into more hardships by blocking major roads all in the name of a phoney one-million-man march.

“Why not hold their rally in a designated place instead of embarking on a march hat will cause chaos and hardships in the state?”
On Buhari’s admisson that “he just went off for a couple of weeks to rest,”Fayose said; “who do we now believe? APC said Buhari went on working visit to UK while Buhari himself said he went to UK to rest.
“When asked by press men whether or not he ever visited any hospital in UK,Buhari said: ‘What is wrong for me to go the hospital?’
“By this statement from Buhari himself, it is clear that APC and its lying leaders tried to fool Nigerians, lying so brazenly and using fake pictures to authenticate their lies.

“Even though there is nothing wrong in Buhari going for medicare abroad, afterall he should be seeing his doctors more often at his age, it is shameful that APC lied so brazenly trying to cover up the obvious reasons Buhari travelled for 15 days.
“What is wrong is the lies told to defend Buhar’s trip to the UK to rest and seek medicare.The fake pictures of Buhari walking the streets of London, the fake Tony Blair picture and the use of pictures taken in Transcop Hilton, Abuja and claming that the pictures were taken in London is the main issue.
“Most importantly, presenting Buhari to us as a superhuman, who can never fall sick is what is wrong and Nigerians are expecting Buhari to apologise for all the lies told in an attempt to cover up the real reasons he (Buhari) travelled secretly to UK.”