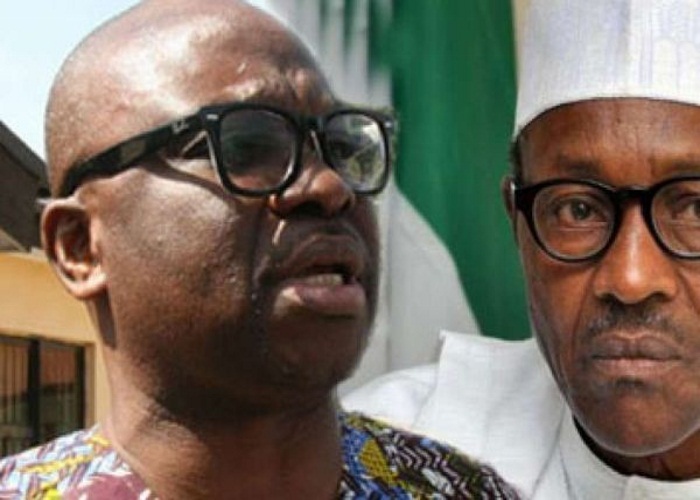 Ahead of the forthcoming governorship polls in Kogi and Bayelsa States, the Ekiti State Governor, Mr Ayodele Fayose, on Sunday, called on President Muhammadu Buhari to revoke the appointment of Mrs Amina Zakari as Acting Chairperson of the Independent National Electoral Commission (INEC), noting that since her tenure as National Electoral Commissioner had expired on July 21, 2015, she cannot continue to preside legally on INEC affairs.

In a statement by his Special Assistant on Public Communications and New Media, Lere Olayinka, Fayose said since INEC still has four National Electoral Commissioners, Abdukadir Oniyangi, Mohammad Wali, Chris Iyimoga and Lawrence Nwuruku, whose tenure are yet to expire, any of them should act as INEC chairman.

According to Fayose, apart from the danger that President Muhammadu Buhari’s appointment of his in-law, Mrs Amina Zakari as Acting Chairperson of the Independent National Electoral Commission (INEC) pose to democracy in the country, the position is unknown to the 1999 Constitution of the Federal Republic of Nigeria (as amended).

The governor, who called on all lovers of democracy in the country to rise in defence of the impartiality of INEC, which he described as the only factor that can sustain democracy, added that “the most honourable thing for President Buhari to do is to rescind the unlawful appointment of Mrs Zakari as INEC Acting Chairperson.”

Fayose said: “Since Mrs Zakari’s tenure as INEC National Electoral Commissioner has expired, she cannot continue to preside legally on INEC affairs, except if duly appointed as substantive Chairman of the commission as provided in Section 154 (1) and (3) of the 1999 Constitution (as amended).

“One of the major legacies bequeathed to Nigeria by the immediate past Peoples Democratic Party (PDP) government was free, fair and credible electoral process and President Buhari, who is a beneficiary of this legacy must sustain this legacy by ensuring that the impartiality of the electoral umpire is unblemished by suspicions of partisanship and illegal appointments.

“Two weeks ago, respected former lawmaker and former top civil servant, Alhaji Tanko Yakassai, revealed that he knew Mrs. Zakari since childhood, and that her late father, the former Emir of Kazaure, was married to President Buhari’s elder sister.

“Alhaji Yakassai, went on to reveal that President Buhari lived with and spent a significant part of his early years in the home of Amina Zakari’s father.

“This is enough establishment of conviviality between Mrs Zakari and President Buhari, whose party, the All Progressives Congress (APC) will be standing elections with other political parties this year and this will no doubt cast credibility aspersion on any election conducted by INEC headed by Mrs Zakari.”

He said Section 153 of the 1999 Constitution (as amended), which established INEC and other Federal Executive Bodies did not make any provision for the appointment of Acting Chairman.

Declaring the appointment as illegal, Governor Fayose said, “Section 154 (3) provided that the president shall consult the Council of State in exercising his powers to appoint a person as the chairman of INEC and there is no record of such consultation before the appointment of Mrs Zakari as INEC ‘Acting Chairperson.’

“As at today, there are four National Electoral Commissioners in INEC instead of 12. They are Abdukadir Sulaimanu Oniyangi, Mohammad Ahmad Wali, Chris Iyimoga and Lawrence Nwuruku.

If anyone should act as INEC chairman, it should be any of the remaining four National Electoral Commissioner, not someone whose tenure has expired.

“The danger in this is also that any action taken by INEC with Mrs Zakari as its head will amount to illegality and it is hoped that President Buhari will avoid plunging Nigeria into an avoidable legal quagmire by rescinding immediately, the illegal appointment of Mrs Zakari as INEC Acting Chairperson, a position that is not known to the Constitution of Nigeria.